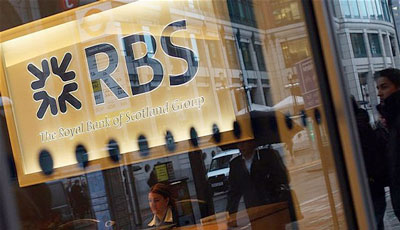 Royal Bank of Scotland Group Plc, Britain’s largest taxpayer-owned lender, could pay as much as $4.5 billion to resolve claims of misconduct in its handling of U.S. mortgage securities, according to Bloomberg Intelligence.

RBS may be closer to JPMorgan Chase & Co.’s $4 billion accord with the U.S. Federal Housing Finance Agency over its sale of mortgage-backed securities than Deutsche Bank AG’s $1.9 billion deal, Elliott Stein, an analyst for Bloomberg Intelligence, wrote on Wednesday.

The FHFA, suing on behalf of government-owned lenders Fannie Mae and Freddie Mac, is seeking to add to more than $19 billion it’s already collected in settlements from 16 other banks. Edinburgh-based RBS has set aside about 2.1 billion pounds ($3.2 billion) to cover the cost of the lawsuit.

RBS is seeking to have the case dismissed, arguing the suit by the FHFA filed in 2011 came too late, according to Bloomberg Intelligence. The legal action relates to $32 billion in residential mortgage-backed securities sold to Fannie and Freddie from 2005 to 2007.

RBS and Nomura Holdings Inc. lost a trial in a separate FHFA case this month in which the British lender must pay $528 million and the Japanese bank $170 million. An extra $108 million could be paid by either bank or split between them, according to BI. The banks sought to postpone their payments while they appeal the judgment, BI said.

A spokeswoman for RBS didn’t immediately respond to a request for comment.