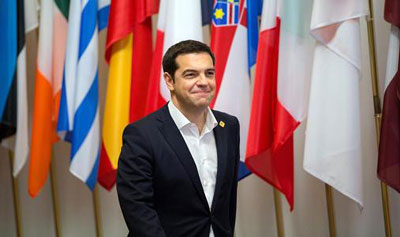 International creditors on Wednesday rejected the Greek government’s plan to end its financial crisis, but they have submitted counterproposals.

News of the rejection, announced by Greek Prime Minister Alexis Tsipras, dashed hopes of an imminent deal between the embattled Mediterranean country and its creditors. Greece needs additional financial aid to prevent it from defaulting on its 1.6 billion euro debt at the end of the month, but its lenders have refused to release funds without the implementation of more reforms.

The International Monetary Fund is believed to be the most skeptical of the troika of bodies overseeing Greece’s bailout. Its creditors have now put forward a new set of counterproposals, sources close to the talks told Reuters.

European markets turned lower on news of the rejection, with Germany’s Dax falling 1.2 percent and the Athens stock exchange down 3.3 percent.

“Certain institutions insist in not accepting equivalent measures suggested by the Greek government,” Tsipras told his colleagues before departing to Brussels, according to a statement. “The non acceptance of equivalent measures has never happened before. Neither in Ireland nor in Portugal. Nowhere!”

He added: “This strange stance could be hiding one of two things. They either don’t want a deal or they are serving certain interests in Greece.”

The prime minister also took to Twitter to update on the latest developments. 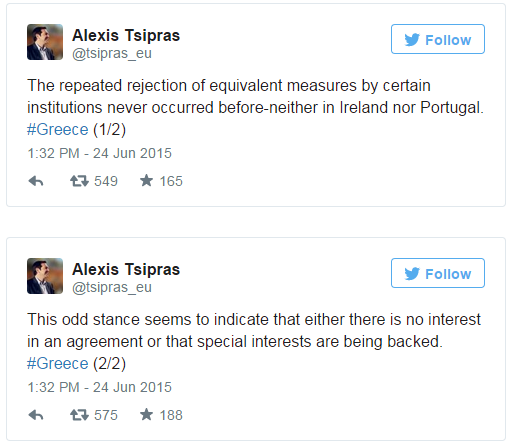 It came at crunch time for Greece’s continued membership of the euro zone.

On Wednesday evening, the Eurogroup of euro zone finance ministers is due to discuss reforms for Greece. These are likely to involve concessions from the Greek government on surplus targets, which many analysts believe to be astonishingly optimistic; pensions; VAT and privatizations.

If the proposals are approved, which now looks far from certain, Greece will get 35 billion euros of EU funds for economic development until 2020.

Dimitris Koutsoumbas, general secretary for the Communist Party of Greece, said the Greek people shouldn’t accept an “antidemocratic agreement” with the EU.

“We need a complete plan—an exit from the euro zone and the currency won’t solve everything,” he told CNBC on Wednesday.

“The attitude of the European Union and Germany is unacceptable. Past Greek governments are also responsible.”

And given this discontent, the chances of a second election this year in Greece are rising. Tsipras’s Syriza-led coalition only has a 12-seat majority, and may have difficulty selling the new deal to its own MPs.

There will “probably” be another election this year in Greece, Panagiotis Karkatsoulis of the centrist To Potami party, told CNBC. However, Makis Voridis, an MP from New Democracy, the center-right party defeated by Syriza in the last elections, said another election would put the country in “big trouble.”

Michala Marcussen, global head of economics at Societe Generale Corporate and Investment Banking, reflected the opinion of many in the markets on Wednesday morning when she told CNBC a Greek deal will “most likely” get through a Greek and German vote.

Market reaction to Greece has been quite calm compared to what has happened in the last few years, aided by the European Central Bank’s expansionist monetary policies, Marcussen pointed out.

As the central bank will likely have to lead the policy response in the event of Greece being forced to leave the euro zone, this level of trust from market participants is important—but if it slips, more trouble likely lies ahead.