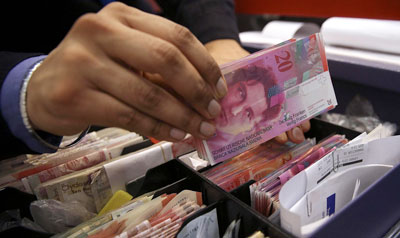 China‘s national foreign exchange market will introduce direct trading of the Swiss franc, the operator said on Monday, as the country pushes greater international use of its yuan currency.

Trading of the Switzerland currency against the yuan begins on Tuesday, the China Foreign Exchange Trade System said in a statement on its website.

Direct trade increases efficiency and reduces the cost of transactions as deals do not need to use a third currency like the US dollar.

The country’s foreign exchange market already hosts direct trading of a number of currencies, including the Singapore dollar, the euro, Britain’s pound and the New Zealand dollar among others.

China is seeking to promote the yuan – also known as the renminbi (RMB) – as a global reserve currency alongside the dollar, an ambition that depends on its willingness and ability to loosen tight restrictions on the currency’s trade.

One major step towards achieving Beijing’s goal is convincing the International Monetary Fund to include the yuan in its internal “special drawing rights” reserve currency basket, with an IMF decision expected soon.

The central People’s Bank of China said in a separate statement that Swiss franc trading would promote bilateral trade and investment between China and Switzerland.

The yuan can only move up or down 2 per cent against the US dollar from a mid-rate set daily by the central bank.

The Swiss franc will be allowed to fluctuate 5 per cent on either side of a central rate, the market operator’s statement said.

In August, China unveiled a surprise devaluation of the yuan against the dollar, moving it nearly 5 per cent lower in one week.

Beijing said the move was part of broader reforms aimed at shifting towards a more flexible exchange rate, but it raised concerns that the Chinese economy was performing worse than had been acknowledged.

HSBC, one of the market makers for yuan-Swiss franc trading, said direct dealings would facilitate greater cross-border use of the Chinese unit.

“We believe the RMB is well on its way to becoming a fully convertible, global currency,” Ryan Song, head of markets for China at HSBC, said in a statement.