Terrorism, Climate Rift, Putin-Obama and Merkel: The G-20 So Far 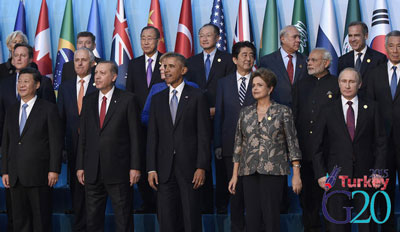 Group of 20 leaders gather on Monday for a second day of talks in Turkey, yet the world’s eyes remain on Paris.

Meetings at the summit in the Turkish coastal resort of Antalya on Sunday were dominated by the aftermath of the attacks in France, with leaders discussing intelligence sharing in the fight against Islamic State and the war in Syria. Terrorism and refugees were again central to talks during a working dinner.

While one-on-one chats will continue on Monday, the official agenda turns back to the economy, namely how to foster growth, reduce unemployment and make good on promises on banking and market regulations made since the global financial crisis. Discussions will also continue on the thorny issue of climate change and which countries should do what to lower carbon emissions.

Not surprisingly in the wake of the slaughter of about 130 people in the French capital, the fight against terrorism has been to the fore. G-20 leaders will pledge to redouble efforts to strike at the heart of terrorist groups by targeting how they are financed, including clamping down on the black market in oil. They also will look at tightening borders to detect travel by sympathizers and bolstering aviation safety.

U.S. President Barack Obama and Russian leader Vladimir Putin met for more than half an hour on Sunday to discuss the Syrian war and efforts to forge a truce. Russia sees the Paris attack as potentially a game-changer in how the two powers cooperate on dealing with Islamic State and the timescale for removing Syrian President Bashar al-Assad.

It hasn’t been an easy few weeks for German Chancellor Angela Merkel as she faces down critics at home and in eastern Europe for her open-door policy on refugees, many of them fleeing the war in Syria. She held firm on how the perpetrators need to be identified so that “innocent refugees” aren’t caught up in the blame. Police and intelligence agencies are trying to figure out if any of the assailants entered Europe from the Middle East posing as asylum seekers. Merkel said she’s due to meet with Obama on Monday.

In a draft of the official communique, which will be finalized before leaders depart later on Monday, the point was made of tackling inequality to make sure more people had access to better jobs and others didn’t evade tax. The host, Turkish President Recep Tayyip Erdogan, went further and said poverty can cause envy and lead to the sort of radicalization that feeds Islamic extremism.

A bone of contention has been what to say about climate change and, more vitally, what countries need to undertake in terms of emissions controls. The French are pushing for tougher language before they host a summit in Paris starting at the end of this month. Other countries aren’t so sure.

Where they do agree is on the work of the Financial Stability Board, which the G-20 set up in the wake of the global financial crisis. A draft of the summit’s official communique said leaders rubber-stamped new measures to avoid taxpayers having to pick up the tab for rescuing large banks and urged further efforts to change rules for some areas of financial markets.

The New Kid on the Block

Unlike Merkel, it’s been a pretty good couple of weeks for new Canadian Prime Minister Justin Trudeau. At the G-20, he lapped up attention like an A-list celebrity.