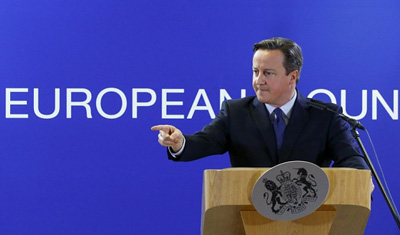 Prime Minister David Cameron said his bid to change Britain’s relationship with the European Union is gathering momentum after fellow leaders signaled they are willing to find compromises on his demand for curbs on welfare.

Rather than the fight that many analysts said Cameron needed to satisfy British voters, the prime minister left negotiations in Brussels on Thursday night with an optimistic message about the prospects for a deal at the next European summit in February. Leaders resumed their talks Friday with the focus on issues including Syria, fighting terrorism and energy.

“There is momentum — there was enormous support in the room for finding ways of keeping the U.K. in the EU,” Cameron told reporters. “We’ve taken a big step forward for a better deal for Britain but there’s still a lot of hard work to be done.”

The main sticking point remains Cameron’s determination to make citizens of other EU countries ineligible for in-work, housing and child welfare payments until they have been in the U.K. for four years. The prime minister has pledged to seek to overhaul the bloc before an in-or-out referendum on British membership to be held by the end of 2017.

Leaders indicated they might accept a compromise similar to opt-outs from certain EU rules that Denmark won in 1992, an EU official said on condition of anonymity. This could be enshrined in law before the U.K. holds its referendum and could include a so-called emergency brake to enable Britain to restrict welfare payments if it could prove exceptional circumstances, the official said.

His fellow leaders echoed Cameron’s view that a deal can be reached, even though they didn’t make any substantial concessions on the night.

“Tonight was a make or break moment,” EU President Donald Tusk told reporters after the meeting. “Leaders voiced their concerns but also demonstrated willingness to look for compromises. I am much more optimistic than before today’s meeting.”

“A lot of time is needed, a lot of effort but I believe we can reach an agreement by February,” Estonia’s Taavi Roivas said.

Cameron’s critics at home were unimpressed.

“David Cameron came, saw, and got hammered,” Nigel Farage, leader of the U.K. Independence Party, said on Twitter. “How many times can his little plans be rejected? I suspect he will probably get a few minor concessions.”

Matthew Elliott, chief executive of the Vote Leave group, which is campaigning for British exit from the EU, said Cameron’s negotiating efforts were “trivial” and U.K. voters won’t be taken in by his “spin.”

Cameron had vowed to battle through the night as government chiefs from across Europe warned they wouldn’t accept significant elements of his plans for changes to the terms of Britain’s EU relationship. Instead the meeting broke up around midnight with other leaders offering warm words, while pushing the challenge of crafting solutions to February.

The U.K. is seeking reform across four areas — competition, ever closer union and protection for non-euro nations alongside the changes to access to welfare.

“All EU states have expressed difficulty on the social benefits-free movement issue,” Maltese Prime Minister Joseph Muscat said in an interview during the summit. “The U.K. must understand that any concession given to it must also be given to all others.”

While Cameron initially sought to clinch a deal at this summit, the lack of consensus on the welfare-payments issue means attempts for an agreement are now slated for the next leaders’ gathering in February.

Since Cameron published his list of demands at the start of November, EU governments have warned him that the welfare payments plan is against the spirit of European unity because it discriminates against some workers.

“France wants Britain to stay in the EU, but it must be done in the respect of EU principles,” French President Francois Hollande said. “For many, the four years seems long and difficult to reconcile with European treaties.”

German Chancellor Angela Merkel said leaders want to find a compromise to keep Britain in the EU, but treaty changes needed to lock in Britain’s demands will have to wait. “We could agree to make them later,” she told reporters after the meeting.

A delay in making any reforms legally binding may help the campaign for Britain to withdraw from the EU, a panel of U.K. lawmakers said this week. A referendum campaign based on promises from European leaders would be harder to conduct, they said in a report.

Polls of voter sentiment in the U.K. vary widely on whether the ballot would yield an “in” or “out” answer. The latest, an online poll sponsored by former Conservative lawmaker Michael Ashcroft, suggested British voters are more inclined to vote to leave the EU than to remain inside it — with up to a third still to make up their minds. It was published Thursday, one day after two telephone polls gave the opposite result.

Cameron referred to the polls during his presentation to his fellow leaders as he pleaded with them to help win British voters around to staying in the EU.