A global equities selloff deepened in Asian trading and Mexico’s peso weakened as polls indicated a tightening race ahead of next week’s American presidential election. The yen gained with the Swiss franc and gold as investors favored haven assets.

The MSCI Asia Pacific Index dropped by the most since September and futures signaled further losses for U.S. equities after the S&P 500 Index sank to its lowest since July. The yen rose for a second day, while the Swiss franc and gold were near their highest levels in almost a month. New Zealand’s dollar strengthened as jobs data damped prospects for interest-rate cuts in the nation and U.S. Treasuries edged higher ahead of a Federal Reserve policy decision. Crude oil fell after a report showed American stockpiles expanded. 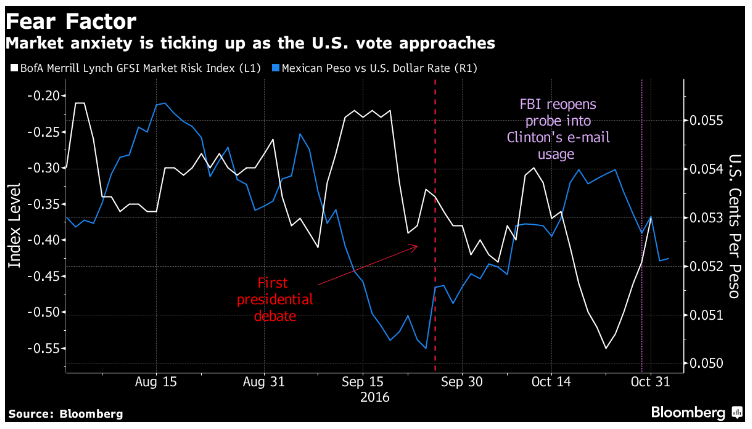 An ABC News/Washington Post tracking poll on Tuesday showed Republican Donald Trump with 46 percent support to Democrat Hillary Clinton’s 45 percent, putting him ahead for the first time since May. Poll aggregator FiveThirtyEight estimates that the chance of a Clinton victory has fallen by about 10 percentage points in the past week to 72 percent and a Bank of America Corp. index tracking volatility expectations in equities, bonds, currencies and commodities rose for five days through Monday, the longest run of increases since before the British vote to quit the European Union.

“The markets’ anxiety levels have moved up a gear,” said Chris Weston, Melbourne-based chief market strategist at IG Ltd. This “suggests the bears have the upper hand, with the buying drying up and funds keeping their cash deployed for more certain times,” he said.

While the Fed is expected to leave policy unchanged when a two-day meeting concludes Wednesday, futures indicate a 68 percent chance interest rates will be raised in December. Bloomberg’s dollar index retreated over the last three days as some analysts said a Trump victory could spur volatility in financial markets and reduce the odds of borrowing costs being hiked.

The MSCI Asia Pacific Index declined 1.3 percent as of 1:36 p.m. Tokyo time. Japan’s Topix index slid more than 2 percent, retreating from its highest close since April before the nation’s financial markets shut on Thursday for a holiday, and South Korea’s Kospi index fell to its lowest level in almost four months.

“The Trump risk is in revival,” said Chihiro Ohta, a Tokyo-based senior strategist at SMBC Nikko Securities Inc. “With Trump, there always follows an uneasiness over whether policies will be managed properly in the U.S., and given the holiday tomorrow in Japan, there’s no need to build positions at an uncertain time like this.”

Sony Corp. sank to a two-month low after the Japanese electronics maker reported a quarterly profit that missed analysts’ estimates. Sumitomo Electric Industries Ltd. tumbled more than 10 percent after the company lowered its full-year earnings target by 15 percent. Standard Chartered Plc plunged by the most since June in Hong Kong after reporting a lower-than-expected profit and revenue declines for all four of its divisions.

Futures on the S&P 500 Index fell 0.3 percent after the underlying gauge slipped 0.7 percent in the last session. Alibaba Group Holding Ltd. and Facebook Inc. are among companies reporting earnings on Wednesday.

The yen climbed 0.4 percent to 103.71 per dollar, after surging 0.6 percent in the last session. The franc rose 0.2 percent following a 1.4 percent jump that marked its biggest gain in about five months.

Mexico’s peso slid as much as 0.8 percent to its weakest level since Oct. 7. The currency tends to lose ground when support builds for Trump, who has said he would revisit the North American Free Trade Agreement that governs commerce between the U.S. and Mexico. The Republican candidate’s prospects have improved since it was announced Friday that the Federal Bureau of Investigation had reopened a probe of Clinton’s use of private e-mail while Secretary of State.

Before the FBI announcement, “the market had pretty much priced out most of the risk of Donald Trump becoming president,” said Lee Hardman, a currency strategist at Bank of Tokyo-Mitsubishi UFJ Ltd. in London. “Obviously, the markets had to reassess that view now.”

The Kiwi gained as much as 0.6 percent after New Zealand’s jobless rate unexpectedly fell to the lowest level since 2008. A tightening labor market could help Reserve Bank of New Zealand Governor Graeme Wheeler lift inflation back to the middle of his 1-3 percent target band, negating the need for further policy easing.

Gold added 0.4 percent, after surging 0.9 percent on Tuesday. Copper snapped a seven-day winning streak in London and zinc retreated from a five-year high.

Rubber dropped by the most in two weeks in Tokyo after a report showed U.S. auto sales cooled in October.

Ten-year bonds rose in Australia, Singapore and South Korea. The yield on U.S. Treasuries due in a decade fell one basis point to 1.81 percent, after touching a five-month high of 1.88 percent in the last session. It’s unlikely the rate will climb too far past 2 percent anytime soon given how the American economy is performing, according to Jim Caron at Morgan Stanley Investment Management, which oversees $406 billion.

“Nobody really believes that rates can just rise very very quickly, or that bond prices can fall off a cliff,” Caron, who is based in New York, said Tuesday on Bloomberg Television. “You’re not seeing the growth. You’re not really seeing the inflation.”

New Zealand’s 10-year bond yield increased by three percentage points to 2.77 percent. While investors are almost certain the central bank will cut its benchmark interest rate to a record low 1.75 percent at a policy meeting next week, swaps prices indicate that the chance of a further reduction by the end of next year has dropped to about 11 percent, from 36 percent a month ago.