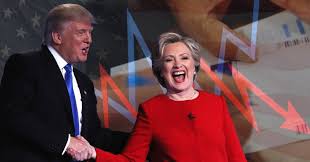 Bookmaker Paddy Power grabbed headlines when it called the US Presidential Election in mid October – the Irish firm paid out $1m (€880,000) to Clinton backers.

It is now facing another $4.5m (€4.1m) payout to those who put their money behind the Republican.

“His victory in the early hours of the morning – which has left serious question marks over our company Christmas party – was indicated last week as his odds were slashed following an FBI investigation into Clinton’s private email server,” the company said.

This is the bookmaker’s biggest ever political payout.

“We’re in the business of making predictions and decided to put our neck on the line by paying out early on Hillary Clinton, but boy did we get it wrong,” spokesperson Féilim Mac An Iomaire said.

He added that they now have “very, very expensive egg” on their faces.

Paddy Power is taking bets on the businessman being impeached during his term at 10/1.

Once the businessman announced that he would seek the Republican nomination betting opened at 100/1.

The company now reflects that it was slow to cut Trump’s odds while money poured in behind him and that his performance to claim both the Republican nomination and his late spurt in the polls made him “the biggest political liability in bookmaking history.”