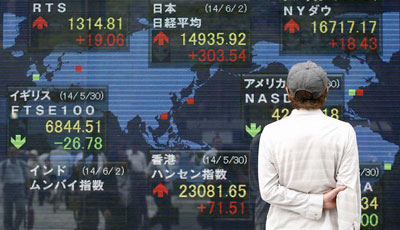 Equity markets outside Japan declined after data showed Chinese producer prices rising at the fastest pace since just after the Beijing Olympics, while consumer prices were weaker than expected. Treasury yields and the dollar continued to climb after a strong jobs report in the U.S.

The Hang Seng Index and Shanghai Composite Index both fell the most this month, while a gauge of Chinese stocks traded in Hong Kong had the steepest drop since mid-January. The MSCI Asia Pacific Index was at its lowest in nearly a month, but Japanese equities were higher, supported by a weaker yen. The yuan was its weakest against the dollar in two months. Oil rose from a three-month low, and gold declined for a fourth day.

Analysts have lifted estimates for Friday’s non-farm payrolls on the back of an ADP reading that showed the U.S. added the most workers in almost three years. A rate increase is priced into the market as a near-certainty. The bull market in U.S. stocks has entered its eighth year on one of the steepest post-election rallies in history.

China’s producer price index reading shouldn’t concern policy makers as it is set to peak in a month or two and then drop as base effects reverse, according to Julian Evans-Pritchard, China economist at Capital Economics. “The lack of a pick-up recently highlights how insensitive consumer prices are to producer price inflation,” he wrote in a note. “We expect any further tightening of policy this year to be driven by concerns about credit risks rather than efforts to contain inflation.”

What’s ahead for the markets: