Lighting, heating, transport, industrial output: energy is vital for essential day-to-day services, without which we and our businesses cannot function. Turning on our computers or starting our cars are actions that we take for granted, yet they represent the final stage of a complex process.

First of all, energy resources have to be extracted from our environment. Primary energy sources are converted to derived products (for example crude oil into motor gasoline). Fossil, nuclear and renewable energies are also converted into electricity and derived heat. And then energy needs to be transported to the place where it will be used. All these step require coordinated involvement of technical, logistical and financial resources.

Energy is one of the main challenges Europe is facing. The prospects of rising energy prices and increasing dependence on imports could jeopardise the economy as a whole. EU countries are free to develop whatever energy sources they wish. They must, however, take account of the EU renewable energy objectives.

In 2015, households in the European Union (EU) accounted for a quarter of the total final energy consumption. Most of their energy consumption was covered by natural gas (35.6%) and electricity (25.0%). Renewables counted for 15.7%, petroleum products for 12.7% and derived heat for 7.8%, while a small proportion (3.3%) was still covered by solid fuels.

The picture varies across the EU Member States. Gas accounted for more than half of the final consumption energy of households in the United Kingdom, Hungary, Slovakia and Italy, while in Malta and Sweden a similar share was made by electricity. Renewable energies (mostly solid biofuels) made up over 40% of the households’ final energy consumption in Croatia, Slovenia, Estonia, Latvia and Romania. 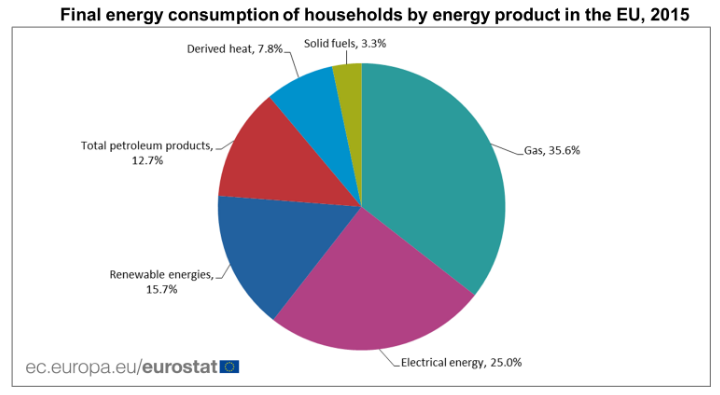 … and essentially for heating purposes

As is to be expected, households mainly used energy for heating their homes: this represented around two-thirds (64.7%) of their final energy consumption. In addition, the energy used for water heating accounted for 13.9%, meaning that overall, the heating of space and water accounted for 78.6% of the final energy consumed by households. Energy used for lighting and the use of most electrical appliances accounted for 13.8% of the energy used by households, while the main cooking appliances represented 5.7%, air conditioning 0.5% and other end-uses 1.5%.

Source: eurostat – Energy consumption and use by households