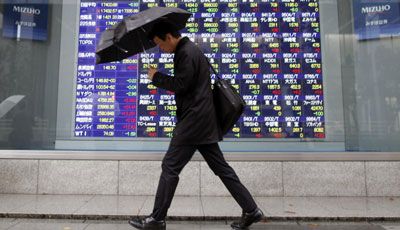 Asian stocks retreated as investors pulled back on the final day of the biggest quarterly advance in five years for the region’s equities. The dollar held gains amid signs of strength in the global economy, while the South African rand tumbled.

A stocks rally in Japan melted away in afternoon trading, despite data showing the first back-to-back increase in the nation’s core consumer prices in more than a year. Chinese equities rose after an official factory gauge climbed to the highest in almost five years, though Hong Kong shares fell. The greenback maintained gains as Federal Reserve officials suggested rates may need to rise faster than the market currently anticipates. The rand extended losses after President Jacob Zuma fired his finance minister.

“The prospect of unpredictable flows in the foreign-exchange, bond and equity markets is high as we head into the last day of the month and more importantly quarter-end,” Chris Weston, chief market strategist at IG Ltd. in Melbourne, said in an email. The fiscal year in Japan ends Friday.

U.S. government policy may further boost the economy and eventually add fuel to an inflation rate that is already approaching the central bank’s official target, said Federal Reserve Bank of New York President William Dudley. That comes after Fed Bank of Boston President Eric Rosengren argued Wednesday that four hikes in 2017 may be needed to guard against economic overheating, and San Francisco’s John Williams said he “would not rule out more than three increases total for this year.”

What investors are watching: