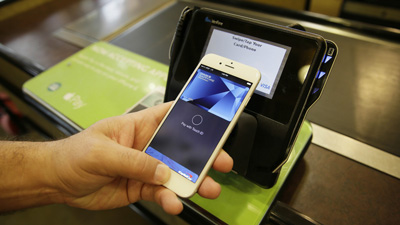 The number of Apple Pay, Samsung Pay and Android Pay users is about to hit 100 million and should top 150 million by the end of 2017, according to new data from fintech analysis firm Juniper Research.

Apple, Samsung and Google (which operates Android Pay) owned 41% of the contactless payments market in 2016 – double their 20% market share just a year earlier, according to Juniper. By 2021, the three companies will likely own 56% of the market, with a combined user base of more than 500 million users, it said.

“The research found that Apple Pay, and the alternative wallets that have followed in its wake, are set to establish themselves as the primary contactless mechanisms of choice in the U.S. However, the challenge facing Apple and its rivals is to ensure that the infrastructure is in place for consumers to make in-store payments,” Juniper reported.

“We believe that as contactless usage gains traction and consumers/merchants recognize the speed and convenience it offers, then, as in European markets, there will be a further and significant increase in availability at the point-of-sale,” Juniper research author Nitin Bhas added.

There are other signs of market traction as well, especially for Apple. According to data from the 2017 POS/Customer Engagement Survey released by Boston Retail Partners in January, about 36% of all North American retailers now accept Apple Pay. The retail industry research and advisory firm expects nearly half of all North American retailers to accept Apple Pay by the end of this year.

“There are a multitude of mobile wallets and payment apps on the market today, and the arena keeps changing,” Boston Retail Partners wrote. “In the past year, we have seen the demise of the merchant-backed CurrentC and the rise of Walmart Pay. While adoption had generally been slow, this year we saw a big jump in adoption of some of these mobile payment options. This is yet another way to personalize and enhance the customer shopping experience by bundling loyalty and other features with a branded mobile payment app.”

Education and rewards will likely fuel much of what comes next, it added.

“We have found repeatedly that not only are consumers unsure of how and when mobile payments can be used, but even more telling, associates are unsure,” it added. “For mobile payments – or mobile wallets – to succeed, there must be further education at the point of sale to ensure that a transaction using a mobile device is not longer or more complicated than traditional payments methods for either the customer or associate. The other critical factor is explaining the value of tying mobile wallets to loyalty rewards programs. Customers need to feel that utilizing mobile payments enhances the shopping experience and that they are being rewarded for the experience – this will enable a win-win experience for retailers and customers.”