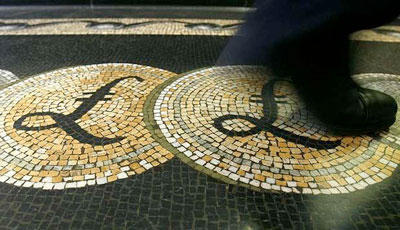 Foreign exchange strategists at Société Générale have confirmed they are expecting further depreciation in the value of Pound Sterling relative to the Euro.

The call comes as the French investment bank release their mid-year review of global foreign exchange markets and accompanying forecasts.

The US Dollar is seen to have reached a peak after years of climbing, and should start to fade.

However, the British Pound is also tipped to struggle with analysts envisaging declines coming against a resurgent Euro.

The Pound does look cheap at current levels but Societe Generale says that does not suggest it cannot get cheaper.

“GBP is cheap relative to the dollar on the basis of purchasing power parity, albeit for very good reason,” say Soc Gen. “However, it isn’t noticeably cheap relative to the EUR or any of its other satellite currencies (the SEK, PLN and HUF stand out). Brexit negotiations will add to policy uncertainty.”

The problem for Sterling going forward appears to be expectations for the UK economy to lose its status as one of the best-performing economies in the developed world over coming months.

The UK economy has done well in the 12 months since the vote to leave the EU but the first-quarter 2017 GDP growth of 0.1% was the slowest in the EU and the uncertainty emanating from the 8 June election result won’t help going forwards. 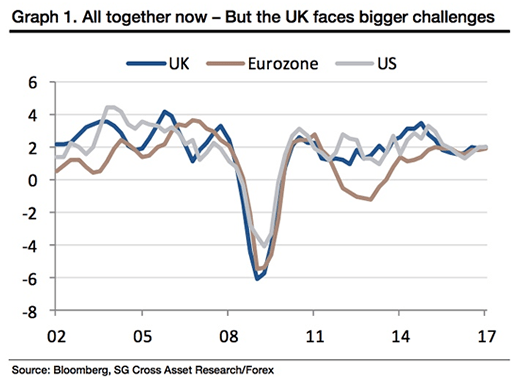 Some of that is ‘in the price’, but not all.

One piece of good news cited by Juckes concerning the outlook is that the UK’s balance of payments account which has improved sharply thanks to a big improvement in the primary income balance, which captures earnings from foreign investment.

The current account is the country’s bank balance with the rest of the world, for years the UK has spent more with other nations than it has earned as imports exceed imports.

However, the country’s trade position has improved of late as a weak Pound and higher commodity prices “have done their thing,” says Juckes.

“It’s just a pity that Brexit threatens the huge services surplus much more than a weak currency helps the even bigger goods deficit. Still, a current account deficit of 2-3% GDP in the coming years should not be a huge factor for the currency,” says the analyst.

ECB to Deliver the Goods

Societe Generale note there are two further key points that affect the outlook for the GBP/EUR currency pair.

The first is that the story of relative growth trends is one of the euro area catching up with the US and UK, which is why the European Central Bank is edging closer to normalising its monetary policy. (i.e raising interest rates from record-lows and ending the extraordinary process of printing money to buy government and corporate bonds).

Meanwhile, the Bank of England is expected to keep policy unchanged for the foreseeable future. So while one is looking to tighten, one is remaining static. This should aid the Euro against Sterling.

And the second is that however negative the economic effects of Brexit prove to be (Soc Gen think it will be corrosive, rather than a short sharp shock), “they are a UK-specific drag on growth, which will keep UK monetary policy more accommodative and weigh on the Pound, particularly against the Euro,” says Juckes.

Potential for Signficant Euro Strength Ahead

In their mid-year review of foreign currency markets Soc Gen’s most notable call is one that sees the potential for significant appreciation in the Euro which could jump like a “Jack in the Box when the lid starts opening,” says Juckes.

Interest rate volatility fuelled by central banks exiting accommodation will be channelled towards FX. In the process, the EUR/USD skew could flip in favour of EUR calls for the first time since 2009,” notes the strategist in a note to clients.

‘Calls’ are options which appreciate when a currency rises and so indicate a bullish outlook for EUR/USD – with a target an end of year target at 1.20 according to the strategist.

1.20 may even be a conservative estimate according to Juckes’ colleague Oliver Corbier, who sees the possibility of move up to 1.30 based on, “technicals, undervaluation, EA strong capital surplus and the ECB withdrawing from QE,” which are, “strong forces that may propel the euro much higher than our 2018 forecasts.”

Forecasts for the Pound Against the Euro

Societe Generale are forecasting the EUR/GBP exchange rate to trade at 0.92 by the end of 2017 and it should remain at this level by June 2018.

From a Pound to Euro exchange rate this equates to GBP/EUR at 1.0870.