Betting on market volatility? Here’s what you need to know 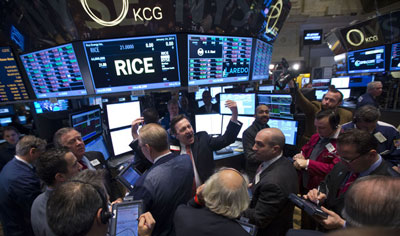 Historic low market volatility is spurring investors to find returns in new places, with some rushing their money into what is sometimes referred to as “the most dangerous trade in the world.”

In a research note to clients, David Lafferty, chief market strategist at Natixis Asset Management, explained that super-low volatility has spurred a new sub-industry – “shorting” volatility with a number of exchange-traded funds and derivative products that have a “V” in their tickers.

The CBOE Volatility Index, or VIX, is a key measure of market expectations of a near-term volatility conveyed by S&P 500 stock index option prices. The VIX, widely considered as a measure of fear and uncertainty in the market, closed the day after the French election on May 9 at 9.77, its lowest level since December 1993. The VIX is currently trading at 10.4 and is down 26 percent year-to-date.

“During this period of low volatility, shorting volatility has become incredibly profitable,” Lafferty explained. Shorting refers to a trading technique where investors bet that an asset or security will fall in price.

“To the casual observer this may seem odd: Shorting an investment profitably requires borrowing and selling the asset now while later repurchasing it at a lower price (and pocketing the difference). But volatility hasn’t been falling. It fell dramatically after the Great Financial Crisis and, with some sporadic exceptions, has remained mired below 15 in the past several months – and more recently below 10.”

In July, Boris Schlossberg of BK Asset Management, told CNBC that betting on unusual volatility could be “the most dangerous trade.” He referred to the XIV exchange-traded note, a product designed to deliver the inverse performance of the VIX index.

This could be “the most dangerous trade in the world,” according to the macro strategist. “It’s already had a massive run up because we’ve had very low volatility,” but at this point, “it’s very likely that volatility is going to increase,” Schlossberg told CNBC’s Trading Nation.

Flows into the XIV have surged as much as 100 percent since the start of this year.

“The futures market for VIX is usually in contango ( futures prices are higher than spot prices ) so investors reap steady profits as the futures contracts that are sold at higher prices are repurchased later (i.e., rolled over) closer to the lower spot price,” he added.

Contango is a situation where the future spot price is below the current price, and people are willing to pay more for a commodity at some point in the future than the actual expected price of the commodity.

While low periods of volatility are not good for markets, analysts have warned that the risk of market complacency has increased. Therefore, traders continue to implement hedging strategies to mitigate possible periods of higher volatility.

The interesting thing about VIX is that most people look at it as high or low and they say if it is low it must spike but basically what the volatility tells you are expected fluctuations and right now what you have is realized volatility which is very low,” Runestone Capital co-founder Rune Madsen told CNBC Wednesday.

“VIX is measuring future volatility, implied volatility and that is low. Fewer people want to make big bets on large moves when it hasn’t occurred for such a long time.”

Can the VIX turn vicious?

Madsen further explained that the VIX can move rapidly and when people trade VIX-related products they tend to trade futures tied to it.

“The future prices right now are higher than the spot prices so the VIX can maybe move 50 percent in a day and then you see the futures move maybe 7-8 percent. If then you are betting on a higher price and you know that the curve is in contango, you will need to see a fairly decent move for you to be in profit. The moves can be much larger on the upside than on the downside,” Madsen added.

The VIX has closed 17 times below 10 this year and close to 50 times below 11 over the past decade. Last month, the index hit 9.3, its lowest level since December 1993 when the VIX hit a low of 8.89. While events such as earnings reports and economic data don’t massively impact the index, big events such as geopolitical risks, political uncertainty, and turmoil can be a big mover for the index.

“Clearly Apple has a market moving effect but normal earnings for more other companies have little effect on the volatility of the S&P 500. So we don’t take earnings or economic numbers into effect because it is extremely random and there is nothing systematic about it,” Runestone’s Madsen told CNBC.

Is there a way up?

“We are still in a world where because of the flood of liquidity, the volatility level in the economic cycles has calmed down, which is how the real volatility in the earnings and corporate events happen. So the big driver continues to suppress the volatility down. We are at the early stage where excess liquidity is going to be slowly tapered off and then drain eventually so we will make the lows in the (coming) weeks and move the index (higher) probably in the next 6-12 months,” Shah added.

So are investors doing the right thing by betting on the status quo – that markets won’t change that much? Natixis’ Lafferty outlines two clear implications. “One, investors should be seeking out safer or lower-risk ways to remain invested. That is, to maintain participation in risk assets but with less downside.”

The second implication, Lafferty explained, is investors should remain hyper-vigilant about the global economy and earnings trends. “It is even more important today as neither central bankers nor troublesome valuations are an investor’s friend. Right now, the entire world is short volatility.”

Source: CNBC – Betting on market volatility? Here’s what you need to know