The Turkish lira and the Euro to dollar fell; Emerging market currencies tumble 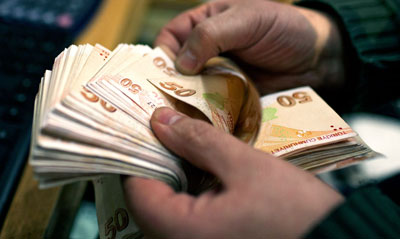 Stocks declined in Asia alongside the euro and emerging-market currencies, while Treasuries and the yen advanced, on continued turmoil in Turkey that’s sparked wider concern of market contagion. The dollar rose to its highest in more than a year.

Shares fell across the region while U.S. equity futures slid, with events in Turkey dominating. President Recep Tayyip Erdogan maintained his defiance toward the U.S. and financial-market orthodoxy in speeches on Sunday even after the nation’s currency plummeted. The lira extended a drop to a fresh record Monday in Asia, sparking a slide in the South African rand, which tumbled to a June 2016 low, and the Indonesian rupiah among other developing-nation currencies.

Money is flowing into safe-haven assets like Treasuries and the Japanese yen as the situation in Turkey gives traders a reason to reduce positions in riskier assets. The lira’s plunge has reminded investors of past crises in emerging markets and rattled nerves, which show little sign of calming.

The decline in the lira “may fuel volatility in emerging market assets and dampen investor sentiment in the near term, as markets are already skittish,” said Kerry Craig, global market strategist at J.P. Morgan Asset Management. “But the drivers of the lira’s decline are very specific to Turkey – therefore it should not derail the positive fundamentals in other emerging markets over a longer-term.”

Elsewhere, commodities slipped but were less affected by the Turkish volatility. Oil traded below $68 a barrel after Iran ruling out talks with the U.S. heightened concerns over global supply, offsetting signs of a potential increase in American output.

Here are some key events coming up this week: