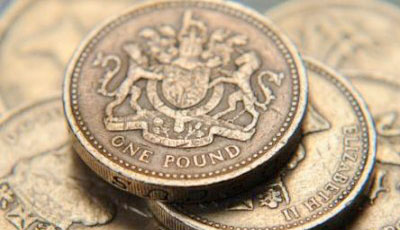 The pound rallied on Monday after a report said Britain was nearing a deal for leaving the European Union and that an all-UK customs arrangement would be part of it.

The currency was lifted by the Sunday Times report over the weekend that said an all-UK customs deal will be written into the legally binding agreement governing Britain’s withdrawal from the European Union.

That would mean an Irish “backstop” deal to avoid a hard border between the British province of Northern Ireland and the Irish Republic, is not required, the Times reported. The issue has been the main stumbling bloc to London and Brussels agreeing a deal.

With talks at an impasse five months before Britain exits the European Union, investors are growing anxious and sterling is moving sharply on any news of a possible breakthrough.

The currency has faltered in seven of the 10 months of this year so far, losing as much as 3.6 percent.

“We think EUR/GBP could be embarking on a sustainable bear trend – largely on the back of the deteriorating EUR outlook,” ING’s head of FX strategy Chris Turner said in a client note.

“Any news this week that the EU would hold a Brexit summit in November would be greeted positively,” he added.

The pound relinquished some of its gains after a report by The Sun newspaper said the prospective dates for an emergency summit to seal a deal had been pushed back to Nov. 27 or 28.

The currency also weakened, though only briefly, after a survey showed business activity in Britain’s dominant services sector slowed to a seven-month low last month.

Firms’ expectations for the coming year are the gloomiest since just after the 2016 Brexit vote, the survey said.

The pound enjoyed its best day of the year against the dollar on Thursday.

It was aided by optimism for a Brexit deal and after the Bank of England signalled more interest rate hikes could be on the way if Britain’s exit from the European Union is smooth.

An agreement with Brussels on the terms of divorce would remove a major uncertainty overshadowing the economy and the BoE as it tries to curb inflation.

The British government and EU officials have this week played down hopes for an imminent Brexit deal, emphasising that while an agreement is close the two sides still have work to do.