More than 1,000 lawyers protest outside parliament at legal aid cuts 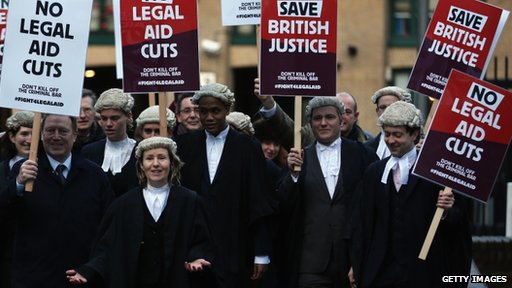 UK- More than 1,000 barristers and solicitors – many bearing placards declaring “Grayling must go” and accompanied by a giant, papier-mache effigy of the justice secretary – have protested outside parliament at cuts to criminal legal aid in their first full-day walkout.

Sir Ivan Lawrence QC, the former Conservative MP, told the demonstration he was ashamed of the government’s destruction of the justice system. Across England and Wales thousands of prosecutions were interrupted or postponed as defendants were left without legal representation.

The disruption will continue for several weeks as barristers refuse to accept “returns” – cases that they would normally cover when other members of their chambers are unable to attend court.

The scale of the protest was intended to send a message to Chris Grayling, the justice secretary, that the £215m cut to the annual criminal legal aid budget will drive many solicitors and barristers out of the profession and leave defendants without expert lawyers to argue their cases. Barristers and solicitors are facing average fee cuts of 6% and 17.5% respectively.

At the rally, which took place opposite the House of Commons, Lawrence said: “I’m ashamed of this government. I have been a Conservative for 60 years of my life. Never has there been a demonstration like this. It’s atrocious that this government has forced us to come and behave like this.

“All my life I have been opposed to strikes and industrial action that are not justified. This action is justified. [The government] think we don’t have any resolve. We are going resolved to stop them destroying the criminal justice system which my party, supporting law and order, has held so dear.”

The actor Maxine Peake, who plays barrister Martha Costello in the TV series Silk, supported the protest. She said: “[Martha] would not have been able to join the Bar if she was starting out now. There would be no opportunity for her.”

The Criminal Bar Association said almost 2,000 fewer cases had been scheduled to be heard at crown courts on Friday compared to the previous Friday as court clerks and judges re-arranged their lists to avoid hearing cases where defendants would be left unrepresented.

Nigel Lithman QC, the chairman of the CBA, said: “If these cuts are not addressed then the British justice system, which is held in such high esteem around the world, will cease to exist as we know it and the British public can no longer expect true justice to be delivered.”