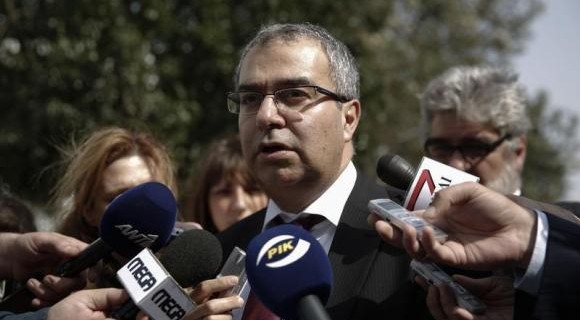 Cypriot Central Bank governor Panicos Demetriades, whose testy relations with the island’s government dogged a tumultuous tenure when Cyprus teetered on the brink of bankruptcy, resigned on Monday.

President Nicos Anastasiades, who had been pressing for Demetriades’s departure ever since last year’s banking collapse and international bailout, accepted his resignation, an official statement said. Demetriades will work out his notice until April 10.

The president said in September he might ask the Supreme Court to rule on whether Demetriades, an appointee of Cyprus’s previous communist administration, could be sacked.

Tensions between the two men have simmered for months, bursting into open animosity when the right-wing Anastasiades was elected Cypriot president a year ago and almost immediately had to apply for a financial rescue.

Demetriades is a member of the Governing Council of the European Central Bank since Cyprus is in the 18-nation euro zone.

The ECB issued repeated warnings to the Cypriot authorities last year not to interfere with the governor’s work. But on Monday it merely said it took note of his resignation.

There was no immediate official explanation of the reasons for Demetriades’s departure. In a text message to Reuters, Demetriades said a statement would be issued shortly.

It was also unclear who his successor would be. One online news portal, Sigmalive, said Chrystalla Yiorgaji, Cyprus’s auditor-general, was a prime contender for the spot.

Two sources with knowledge of the matter said Demetriades submitted his letter of resignation to Cypriot Finance Minister Haris Georgiades, who was in Brussels for a Eurogroup meeting. An ECB official was present.

One source who saw the resignation letter said Demetriades cited “family and personal” reasons for his departure, and “difficulty in cooperating with the Board of Directors” at the Central Bank.

Demetriades was appointed in May 2012 for a five-year term by then President Demetris Christofias, a communist many blame for misguided policies which led Cyprus to near-economic collapse.

The Central Bank’s board of directors, many of whom were appointed by the present administration, had accused Demetriades of keeping them in the dark on several key issues.

That, they alleged, included a clause in a consultants’ contract that they could claim a percentage of money required for the bailout of Cypriot banks. That process was controversial because for the first time in the euro zone debt crisis it was financed partly by raiding savers’ deposits, known as a bail-in.

Cyprus is to receive 10 billion euros in bailout money from the EU and IMF, but it didn’t include its two main commercial banks, one of which had to fold and the other to seize depositors’ savings to recapitalize.

In documents seen by Reuters, Demetriades maintained at the time that he agreed to the clause under duress.

Aides to Demetriades said the governor was constantly being cornered, and that a hostile board was a thinly veiled attempt by the presidency to keep the governor in line.

But he was also disliked by key partners in the Nicosia government for a perception that he undermined Cypriot banks before a chaotic bailout last year.

A former economics professor who taught at Leicester University in England, Demetriades faced constant criticism for his perceived slowness to restructure the banking sector.

He has maintained that when he took over, less than a year before the bailout, he inherited a poorly regulated banking system which took excessive risks.

Persons close to Demetriades had complained that he was the target of an orchestrated campaign to undermine central bank independence by attempting to force the governor to resign.

But the ECB, guardian of central bank independence, gave him only a perfunctory send-off.

“The ECB takes note of the resignation of Panicos Demetriades who has been the governor of the Central Bank of Cyprus through very difficult times and played an important role in the implementation of the adjustment program,” an ECB spokesman said.

“We count on a fruitful cooperation with his successor.”