Laiki and the European Central Bank in the New York Times 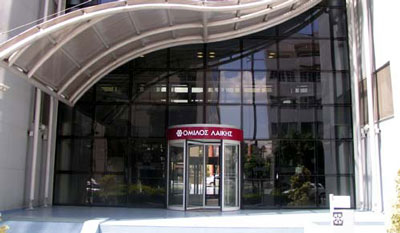 The bankruptcy and accumulated debts of the Laiki Bank were a key element of the Cyprus financial crisis. A recent article (“To Restore Confidence in Economy, A Test of Europe’s Bank’s”, October 17) in The New York Times discusses the stress tests to be implemented by Eurozone banks. In this connection the article also looks into the minutes of the European Central Bank (ECB) relative to the crisis in Cyprus and the decisions which brought about the demise of Laiki.

The ECB had been supplying financial aid in the form of Emergency Liquidity Assistance (ELA) to keep Laiki afloat since 2011. It continued supply ELA right up to the March 2013 negotiations between Cyprus and the Eurogroup. By that time the accumulated debt of Laiki to the European Central Bank had reached a level of 9.4 billion Euros. This level of debt was equal to more than 50% of the country’s GDP, a level of debt which is probably unique in the developed world and which many would say was indicative of poor bank regulation.

The ECB has repeatedly disclaimed responsibility for the ELA decision. In the New York Times article the ECB’s ofen stated view is noted, to the effect that : “such aid (ELA) is the responsibility of national central banks…”. This is the position repeatedly mentioned by the ECB, particularly when the more embarrassing details of the bungled “rescue” are discussed. However, the official journal of the European Union treaties states: “The national central banks are an integral part of the ECSB and shall act in accordance with the guidelines and instructions of the ECB” (Consolidated Version of the Treaty on European Union, Protocol no.4 , article 14.3, Official Journal of the European Union, 26 October 2012).

In early 2012 the ELA debt of Laiki was still manageable. Had the bank been declared insolvent and folded at that time, as many believe should have been the case, the subsequent bail-in by the Eurogroup, might have been avoided. But it has long been maintained by the then governor of the Cyprus Central Bank, Panicos Demetriades that Laiki was solvent and hence eligible for ELA.

The New York Times article reports that the minutes of the ECB show that Mr. Weidmann, head of Germany’s Bundesbank and a member of the ECB governing council was opposed to extending ELA to Laiki, stating at a December 2012 meeting of the ECB council that: “It was not the governing council’s job to keep afloat banks that were awaiting recapitalization and were not currently solvent”.

We may conclude that firstly, at least one member of the ECB’s governing council felt that Laiki was not solvent at the time the decision was made to extend ELA and, Secondly, the the Europan Central Bank must assume responsibility for the decision to continue giving ELA funds to Laiki beyond any limit which might qualify as prudential bank management.

The article cites the statement of an ECB official to the effect that the ECB has changed its procedures so that winding down banks will now be the subject of a “less disruptive Process”. We can only hope so – but it is too late for Cyprus.