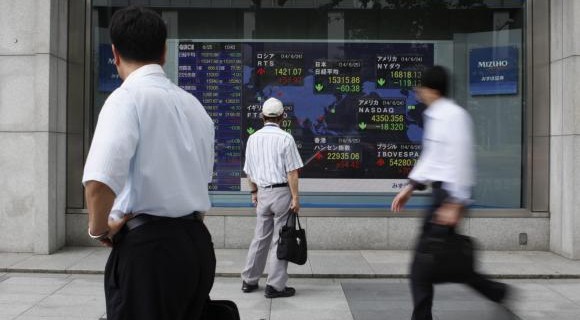 Emerging-market stocks fell as manufacturing gauges in China and Germany retreated, dimming the outlook for exporters. The ruble rose as Russian companies sought funds to meet their tax commitments.

The MSCI Emerging Markets Index lost less than 0.1 percent to 989.60 at 12:07 p.m. in London. Gauges in the Czech Republic, Hungary and Poland decreased at least 0.5 percent. Most Chinese shares declined, led by industrial companies. Hyundai Motor Co. (005380) slumped 2.6 in Seoul. Russia’s currency strengthened 0.6 percent against the dollar as OAO Lukoil led a 0.5 percent increase in stocks.

The preliminary Chinese Purchasing Managers’ Index from HSBC Holdings Plc and Markit Economics was at 50, below the median estimate in a Bloomberg News survey. In Germany, manufacturing and services expanded at the slowest pace in 16 months, signaling that growth in Europe’s largest economy is poised to remain sluggish.

The developing-nation gauge has dropped 1.3 percent this year and trades at 11 times projected 12-month earnings, data compiled by Bloomberg show. The MSCI World Index has advanced 3.6 percent in the period, and is valued at a multiple of 15.3.

Hungary’s BUX Index decreased as much as 1 percent, the most in a week on a closing basis. The PX Index fell the most since Oct. 16 in Prague, ending three days of gains, and shares in Poland declined for the second day.

The former communist nations are suffering as growth stalls in the euro area, their most important source of investment and largest export market. Russia, eastern Europe’s main energy supplier and another trade destination, banned a range of food imports in retaliation for sanctions over the crisis in Ukraine.

The ruble strengthened for a fourth day, set for the longest winning streak since a gain through June 26. The Micex headed for the highest close since October 2013 as Lukoil rose 1.5 percent. OAO Uralkali climbed 3.8 percent, rebounding from its biggest drop since 2008 yesterday.

The naira slumped to a record low against the dollar as oil prices fell and before Nigeria’s central bank meeting to review interest rates. The Nigerian Stock Exchange All Share Index sank 2.1 percent, the most among 93 global equity gauges tracked by Bloomberg.

The yen dropped to a seven-year low versus the dollar, eroding the competitiveness of South Korean exporters, and the won depreciated to the weakest level in 15 months.

The Jakarta Composite retreated 0.7 percent. The Indonesian gauge closed at a seven-week high yesterday after President Joko Widodo fulfilled his election promise this week to raise the price of subsidized fuel and free up funds for health-care, infrastructure and social security programs.