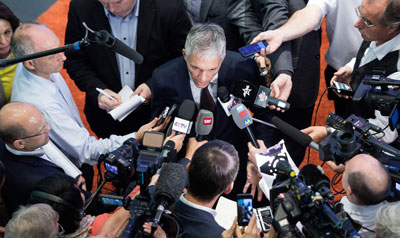 After winning re-election as Switzerland’s Attorney-General on Wednesday, Michael Lauber went straight back to work. Not that he had much choice with a to-do list that’s getting longer by the day.

Swiss authorities last week opened a probe into allegations of cyberspying on the Iranian delegation during nuclear talks in Switzerland. Add in the investigation into FIFA corruption, prosecution of a whistle-blower who alleged HSBC Holdings Plc helped clients hide and launder money in Switzerland, and the Petroleo Brasileiro SA scandal, and Lauber has a lot on his plate.

These affairs are exposing how the small landlocked country and its banks, long magnets for those seeking discretion and secrecy in their affairs, is forcing Swiss prosecutors to step up national law enforcement that’s been perceived as lackluster in the past. Lauber himself admitted in February that the country’s seven-year delay in probing the HSBC affair that generated a media storm in February “must look shocking” to those outside of Switzerland.

The Swiss Attorney-General in December indicted Herve Falciani on charges of industrial espionage and violating bank secrecy laws after he stole client data in 2008 and passed it to French authorities.

“What we have seen in the past is very timid action in prosecuting banks, contrasted sharply with their willingness to prosecute those that broke bank secrecy rules,” said Markus Meinzer, a Marburg, Germany-based analyst with the Tax Justice Network research center.

Some of Switzerland’s most iconic institutions, namely its banks and the more than 20 sporting federations based in Switzerland including FIFA are under greater scrutiny than ever before from U.S. and Swiss regulators. The federal prosecutor office’s probe of FIFA may stem from pressure from the U.S. more than anything else, said Meinzer.

“The U.S. charges and the bad press about not having done enough has obviously brought pressure to change their approach,” he said.

Lauber, the son of a pastor, comes with an impressive resume. He studied law in the Swiss capital before becoming a criminal investigator with the Bern cantonal police. He ran the Swiss prosecutor’s organized crime division for five years and then spent a decade in Liechtenstein, culminating with him heading the country’s financial market regulator. He became Switzerland’s top prosecutor in 2012 and was re-elected in parliament on Wednesday.

Lauber, 49, declined to be interviewed for this story.

The Attorney-General’s increased workload has coincided with a boost in staff numbers at its four Swiss offices, which employed 227 at the end of last year compared to 178 in 2011. Its visibility appears to be climbing too and its approach to tackling FIFA is unprecedented, said Luc Thevenoz, a law professor at the University of Geneva.

“Taking a more aggressive stance like that, it’s quite unusual and quite new,” said Thevenoz, who is the director of the institution’s Centre for Banking and Financial Law.

Swiss police raided two Zurich five-star hotels, including the prestigious Baur au Lac, at dawn on May 27, arresting seven soccer officials wanted on racketeering and money laundering charges in the U.S. The same day, the Swiss Attorney-General announced it had begun criminal proceedings against “persons unknown” related to the selection of the 2018 and 2002 World Cups.

Speaking in German, French, Italian and English to reporters in Bern on Wednesday, Lauber gave a few insights into the FIFA probe while pleading for patience and to be left alone so his office could focus on the investigation. With nine terabytes of data from banks and FIFA to digest, the probe will take time. By comparison, the U.S. Library of Congress had about 525 terabytes of web-archived data as of March 2014.

“If you see the load of data, this is really the beginning of the investigation,” Lauber said. The processing of this data is “quite a huge workload.”

Lauber has said he practices yoga to relax and forget about the stresses of his day job, even if he admits cases crop up while he’s doing his yogic headstands.

When challenged by reporters Wednesday, Lauber denied he was slow to investigate wrongdoing at FIFA, pointing out that its investigation began in November, well before the headline-making arrests in Zurich.

“I haven’t delayed at all, I received the report from FIFA and am now trying to do all I can,” he said. “One cannot go any faster, one has to conduct this probe according to the Swiss penal code and there are legislative limits.”