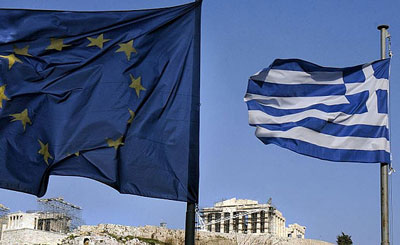 Europe and the rest of the world are watching nervously these days as the Greek drama (tragedy) is entering its last phase. There has to be some type of compromise (agreement) between the Greek government and its lenders before the end of June, or else Greece will default on its debt obligations that will likely lead to an exit from the Eurozone and return to the national currency. The Greek government is demanding that the solution needs to have a clear commitment on the part of the international lenders for a future debt relief which will make the government debt sustainable.

At this point, the debt of the Greek government stands at around 177% of the country’s GDP (end of 2014). The aim of this short article is to analyze what led to this explosion in debt level, and what needs to be done to keep the debt-to-GDP ratio under control.

The period 2008-2013 Greece has experienced an accelerating debt-to-GDP ratio, growing from 103% in 2007 to 175% in 2013. Why did this happen? One reason has to do with the deep recession that hit Greece, starting in 2008 (at a negative real GDP growth rate of 0.4%) until 2013, peaking at -8.9% in 2011. Another reason are the massive fiscal imbalances throughout the period 2000-2010 that peaked at more than 15% at the end of 2009. The massive fiscal deficits and the already high pre-existing debt levels raised the yields (interest) on government debt as investors expected a higher return to compensate them for the higher risk, sending Greece into a negative “interest rate death” spiral.

Isolated from the foreign capital markets, Greece was forced to sign the first economic adjustment programme (MoU) in April 2010. In 2012, a haircut on public debt held by private creditors was imposed (around €110 billion) to lower the debt level. The aim at that point was that this restructuring, coupled with lower interest payments and prolonged maturities on remaining debt, fiscal consolidation, primary surpluses and proceeds from the privatization programme would lead to a sustainable level of 120.5% of GDP by 2020.

By the end of 2014 and after some years of tough austerity measures Greece managed to produce positive economic growth for all the first 3 quarters of 2014 (after years of recession), a primary surplus though fiscal consolidation, was able to fully recapitalize its banking system and pass the ECB stress tests, which created the foundations to significantly lower the debt-to-GDP ratio in the coming years (by both lowering the debt burden and increasing the GDP). However, the events that materialized since last January changed the whole dynamics with the economic situation deteriorating drastically with an accelerated pace, and liquidity has completely vanished from both the government budget and the banking system. The uncertainty led to new financing gaps, and now more drastic measures will be needed to correct the situation.

Expectations for the future

In my humble opinion, Greece needs to agree on a deal with its lenders even if this includes harsher measures because the alternative would be far worse. At the same time, the country needs to finally implement the structural reforms that would make the economy more competitive and productive (that includes labor and pension reforms, as well as privatization of state-owned enterprises). That can lead to a sustainable and healthy GDP growth which can help reduce the debt-to-GDP ratio to sustainable levels.

In a non-paper provided by the Greek government during the Eurogroup meetings of last February, the Greek technocrats argued that GDP growth is as important, and even more important, than the primary surplus to reduce the debt–to-GDP ratio. They also argued that the Greek debt should be calculated in Net Present Value (NPV) terms (as opposed to nominal terms). With an assumed discount rate of 5%, this ratio is now at 133% of GDP and can reach a sustainable level of 120% in 2020 with an annual primary surplus of 1.5% of GDP and a nominal growth at 4%. I do not disagree with the above remarks, but I would add that in order to achieve this rate of growth, structural reforms need to be implemented as soon as possible.