Why Are So Many People Freaking Out About A Stock Market Crash In The Fall Of 2015? 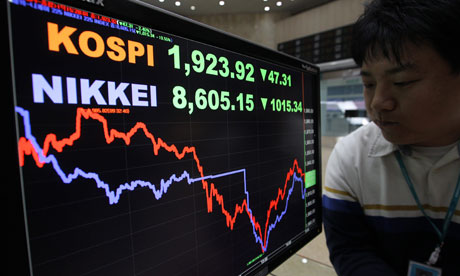 Is the stock market going to crash by the end of 2015? Of course stock market crashes are already happening in 23 different nations around the planet, but most Americans don’t really care about those markets. The truth is that what matters to people in this country is the health of their own stock portfolios and retirement accounts. There are a lot of people out there that are very afraid of what could happen if the money that they have worked so hard to save gets wiped out in a sudden financial collapse. And right now there is an unprecedented amount of buzz about the potential for a giant stock market crash by the end of this calendar year. In fact, I don’t think that I have ever seen more experts come out with bold predictions that a stock market crash will happen within a very specific period of time.

The following is a sampling of some of the experts that have made very bold proclamations about the rest of this year over the past few weeks. Many of these individuals are putting their credibility on the line by proclaiming that a stock market crash is just around the corner…

Tom McClellan loves doing what financial advisers tell you not to do. He tries to time the financial markets — to the exact day, if his charts align just right.

At the moment, they are telling him to be bullish on the stock market for all of his trading time frames, including those that trade every few days, weeks and months. But bulls should be ready to flee, as soon as this week.

That’s because McClellan said his timing models suggest “THE” top in stocks will be hit some time between Aug. 20 and Aug. 26. He expects “nothing good for the bulls for the rest of the year,” he said in a phone interview with MarketWatch.

McClellan doesn’t have a strong view on how far stocks could fall, just that it will probably be an “ugly decline” lasting into early 2016.

-Harry Dent recently stated that we are just “weeks away” from a “global financial collapse“.

-Gerald Celente says that “the global economy has collapsed” and he is “predicting that we are going to see a global stock market crash before the end of the year“.

“On October 7, 2015, the first economic supercycle since 1929 will trigger a global financial crisis of epic proportions. It will bring Europe, Japan and the United States to their knees, sending nearly one billion human beings on a roller-coaster ride through hell for the next five years. A ride like no generation has ever seen. I am 100% confident it will hit within the next few months.”

-Jeff Berwick, the editor of the Dollar Vigilante, says that there is “enough going on in September to have me incredibly curious and concerned about what’s going to happen“.

-Egon von Greyerz recently explained that he fears “that this coming September – October all hell will break loose in the world economy and markets“.

-Even the mainstream media is issuing ominous warnings now. Just a few days ago, one of the most important newspapers in the entire world published a major story about the coming crisis under this headline: “Doomsday clock for global market crash strikes one minute to midnight as central banks lose control“.

-The Bank for International Settlements and the IMF have jumped on the prediction bandwagon as well. The following comes from a recent piece by Brandon Smith…

The BIS warns that the world is currently defenseless against the next market crisis. I would point out that the BIS has a record of predicting economic crashes, including back in 2007 just before the derivatives and credit crisis began. This ability to foresee fiscal disasters is far more likely due to the fact that the BIS is the dominant force in global central banking and is the cause of crisis, rather than merely a predictor of crisis. That is to say, it is easy to predict disasters you yourself are about to initiate.

It is no mistake that the warnings from the BIS and the IMF tend to come too little too late, or that they are beginning to compose cautionary press releases today that sound much like what alternative analysts were saying a few years ago. The goal of these globalist organizations is not to help people prepare, only to set themselves up as Johnny-come-lately prognosticators so that after a collapse they can claim they warned us all, which can then be used as a rationalization for why they are the best people to administrate the economies of the planet as a whole.

So why are so many prominent voices now warning that a global financial crisis is imminent?

The answer is actually very simple.

A global financial crisis is imminent.

Back on June 25th, I issued a red alert for the last six months of 2015 before any of these other guys issued their warnings.

When I first issued my alert, things were still seemingly very calm in the financial world, and a lot of people out there thought that I was nuts.

Well, here we are just a couple of months later and all hell is breaking loose. 23 global stock markets are crashing, the price of oil has been imploding, a new currency war has erupted, industrial commodities are plunging just like they did prior to the market crash of 2008, a full-blown financial crisis has gripped South America with fear, and junk bonds are sending some very ominous signals.

In the U.S., things are beginning to slowly unravel. The Dow was down another 162 points on Wednesday, and overall we are now down almost 1000 points from the peak of the market. At this point, it isn’t going to take much to push us into a bear market.

So enjoy what is left of August.

September is right around the corner, and if the experts that I mentioned above are correct, then it is likely to be one wild month.