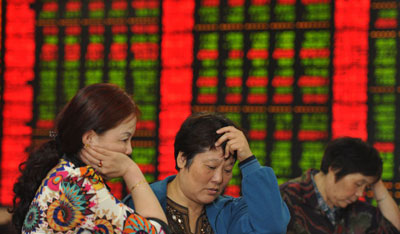 China has announced tougher rules on trading stock index futures and foreign exchange derivatives as it seeks to steady jittery markets whose weakness has raised concern over the health of the world’s second-largest economy.

But the way it has pushed through a raft of measures in recent weeks has heightened foreign investors’ concerns about China’s commitment to market reforms and its ability to handle financial instability.

The latest moves coincide with signs that China’s annual economic growth may dip below 7 percent in the third quarter for the first time since the global financial crisis, marking a slowdown in one of the world’s main engines of economic expansion in recent years.

The central bank will require reserves to be set aside for purchases of all currency derivatives from October, according to a document seen by Reuters, making it more expensive to bet on further depreciation of the yuan.

The move expands the scope of a similar document, seen on Tuesday, in which the central bank said it will require banks to hold reserves on behalf of clients’ trading of currency forwards, in a move seen curbing speculation and volatility after a shock Aug. 11 yuan devaluation.

Surprised by the global reaction to that devaluation, Beijing has gone all out to try to cushion the impact.

The People’s Bank of China (PBOC) has set a slew of strong daily trading midpoints for the yuan, increased how frequently it has state banks sell dollars to support the currency and has conducted rare intervention in derivative markets.

Some traders believe such high-frequency intervention in the spot market and the coming requirements in derivative trading mark a step backward for China’s currency reforms.

Another concern is what Beijing’s end-game is, given that efforts to hold up the yuan so far have required it to drain the country’s massive foreign exchange reserves.

Separately, the China Financial Futures Exchange said on Wednesday it would take further steps to curb excessive speculation in stock index futures trading, in its second tightening of rules in days.

The move, which followed the market close, could lend some support on Thursday after China’s benchmark index edged lower on Wednesday. At one point it tumbled more than 4 percent, and is down almost 40 percent from the peaks of mid-June when shares started crashing from 7-year highs, partly triggered by a regulatory crackdown on leveraged trading.

“People were thinking about alternatives to circumvent the reserve requirement to bet on yuan depreciation after yesterday’s policy was out. But it’s clear now that it is impossible to do so,” said a Hong Kong-based trader who saw the PBOC document on Wednesday.

The PBOC declined to comment when contacted by Reuters.

If this latest move reduces depreciation pressure, it will also reduce the need for the PBOC to sell foreign currency to buy yuan. But the strategy is not without risks, as in the past overactive interventions have hit transaction volumes, damaging enthusiasm for holding yuan among international investors.

“Repeated intervention to maintain the currency’s stability is at odds with the ‘more flexible exchange rate mechanism’ the central bank announced just three weeks ago,” wrote Chen Long of Gavekal Dragonomics in a research note on Wednesday.

“This contradiction casts doubt over the PBOC’s intentions: whether it is serious about moving to a more flexible currency regime, or whether it has simply re-imposed a de facto peg at a different level against the US dollar.”

The yuan weakened 2.6 percent in August, its worst month on record. This raised concerns a weakening yuan could provoke capital flight even as China’s wider economy stumbles. Offshore markets have been pricing the yuan at a discount to the onshore version.

In late trade on Wednesday, the spread between the onshore yuan and offshore spot widened to about 1,000 pips, the highest level since September 2011, implying foreign investors are pricing in deeper depreciation to come.

Beijing has said it sees no reason for further yuan weakness, with a PBOC official giving Reuters a rare interview in which he defended China’s decision and said it should not be blamed for the global stock rout around the same time.

In a related development, China’s State Administration of Foreign Exchange (SAFE) issued new rules on Wednesday relaxing restrictions on multinational companies’ management of their foreign currency-denominated debt in China, allowing them to pool debt from all their subsidiaries for central management.

Analysts see the moves as also relieving downward pressure on the yuan by encouraging companies to sell off their foreign currency.