London Wants to Become the Center of Chinese Currency Trading 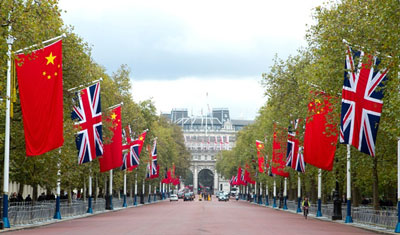 Three years ago, Chinese officials said U.K. Prime Minister David Cameron had “seriously damaged” relations by meeting with the Dalai Lama, the exiled Tibetan leader. As planned talks between the two countries were canceled or failed to take place, worries emerged that Britain would miss out on building deeper economic ties.

That doesn’t seem to be a problem anymore. As the U.K. capital hosts Chinese President Xi Jinping this week, a ranking People’s Bank of China official told a British executive that the central bank already expects London to be the worldwide center for renminbi trading. The London executive asked not to be named, citing confidentiality.

U.K. executives care about relations with China because its economy is widely expected to regain its 19th century role as the world’s largest. And while its currency wasn’t even allowed outside its own borders before 2004, China is opening up now, spurring predictions that the renminbi will become a reserve currency eventually rivaling the dollar. London already has 40 percent of global foreign-exchange trading and wants to build on its dominant position by grabbing a major share of offshore renminbi trading.

“We’re seeing the internationalization of the renminbi growing at a pretty brisk pace here,” said Standard Chartered Europe Chief Executive Officer Richard Holmes. “There’s a lot of runway. There’s a lot further to go. And that’s due to what I view as the end of U.S. dominance.”

London’s prowess in foreign-exchange trading has been a frequent theme in the past week as bankers and politicians cite a statistic from TheCityUK, a financial services lobby group: London trades more dollars than New York, and more euros than all of Europe combined.

For the U.K. capital, increasing its renminbi trading could mean more financial services jobs and more investment. More than $50 billion of Chinese cash has gone into British assets in the past 15 years, according to Standard Chartered estimates. The two countries agreed on 14 billion pounds ($22 billion) of trade deals during Chinese Premier Li Keqiang’s visit last year.

“The big story for the next 15 years is China’s integration with global financial markets,” said David Loevinger, a former China specialist for the U.S. Treasury and now managing director at TCW Group Inc., which oversees about $180 billion. “Leaders of other countries know their prosperity depends on how they structure their relationship with China.”

A study commissioned by Euronext NV forecasts that as much as $5 trillion of Chinese money over the next three to five years will flow into assets on European exchanges.

Data backs up the belief that London’s gravity is pulling in renminbi trading. Peak transactions in the offshore currency against the U.S. dollar take place at 7 a.m. London time, reflecting the handover from Asia when London currency traders are at their desks, according to ICAP Plc data.

Trading has more than doubled at that time in the past year on ICAP’s EBS Brokertec platform. The dollar-renminbi cross has shot up to its third-most traded pair from 14th in 2013. Last year, the broker and market operator created a 24-hour, six-person team focusing on the Chinese currency.

Offshore renmimbi trading more than doubled on Thomson Reuters Corp. markets in the past six months to $192.5 billion in September, including spot and forwards transactions. That’s up from $127.1 billion a year earlier and $28.2 billion in 2013.

“London, just because of the time zone, there’s obviously a lot of European trades with China, but there’s also a bridging point to the U.S. hours and it’s well used to being an international trading hub,” said Mark Hemsley, CEO of Bats Chi-X Europe. “With the broad range of skills in London, it won’t just be FX, there will be whole lot of other finance and trade-finance tools as well. It makes a lot of sense.”

Still, the City has a lot of work to do if it wants to dislodge Hong Kong as the dominant offshore trading center for China’s currency. Hong Kong started the first offshore renminbi market in 2004 and hosted about $50 billion a day in average Chinese currency turnover in April 2013, according to Bank for International Settlements data. In the U.K., that figure was about $24 billion and in China it was $34 billion.

“Hong Kong and London are the big two centers for offshore renminbi,” said Garry Jones, CEO of the London Metal Exchange. “London is definitely the international center if you consider Hong Kong part of China. But really Hong Kong is where the market is.”

As Buckingham Palace hosts Xi, more announcements between China and the U.K. are likely in the offing. Last week, people familiar with the situation said the PBOC and the Finance Ministry plan to soon issue yuan-denominated sovereign bonds in London for the first time. The PBOC bond was earlier discussed in a joint report during Chancellor of the Exchequer George Osborne’s China visit in September.

The same report heralded “the unrivaled depth and liquidity of London’s capital markets” and the “unparalleled financial partnership” between the countries.

It also disclosed plans to study a connection between the London Stock Exchange and Shanghai. But the London-Shanghai stock connect faces major obstacles including exchanges that operate in different time zones. It was described by consulting firm Capital Economics as “more hype than substance.”

London is far from the only city trying to develop closer ties to China. Germany, China’s biggest European trade partner, was awarded a quota of 80 billion yuan ($12.9 billion) that allows European investors to buy securities in China. The news accompanied Chancellor Angela Merkel’s meetings last year with Premier Li and President Xi. The allocation is similar to arrangements for France, South Korea and the U.K., which was the first country other than Hong Kong to win a quota. Like London, Frankfurt hasagreements with the PBOC to get a share of the offshore renminbi market.

“The past few years have been characterized by a strong competition between the EU member states for China in general, for Chinese investment,” said Agatha Kratz, associate fellow at the European Council on Foreign Relations. “The relationships between EU members states and China over the past three years have become more and more economic based, as if there was only economics on the agenda when there’s a meeting.