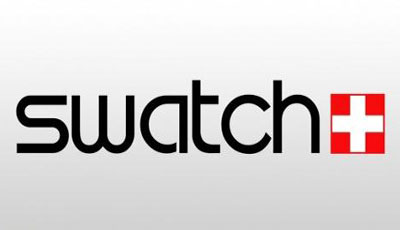 The first four watches combine exciting, colorful yet functional Swatch design with built-in NFC (Near Field Communication) technology, allowing people to use their watches to pay for purchases in shops and stores around the country.

In his fascinating 1888 novel “Looking Backward 2000-1887”, American writer Edward Bellamy envisions a utopian world in which cash has been replaced by credit/debit cards — Bellamy was the first to write about such cards, forty years before anyone else. Always happy to acknowledge fellow innovators and visionaries, Swatch has named its new pay-by-the-wrist watch “SWATCH BELLAMY”.

NFC technology uses high-frequency radio waves to enable electronic devices to communicate over short distances. The new SWATCH BELLAMY watches have all the fun, color and great design that Swatch is famous for – along with a built-in NFC chip hidden under the dial. Like a prepaid bankcard, a SWATCH BELLAMY watch allows customers to pay for items using merchants’ contactless POS terminals. Pay-by-the wrist transactions require absolutely no energy at all from the watch. In China Swatch has partnered with UnionPay, China’s bankcard association, to activate the innovative and easy-to-use system, and with Bank of Communications, where customers will be able to purchase the new watches.

SWATCH BELLAMY celebrated its worldwide premiere at a press conference held October 14, 2015 at The Swatch Art Peace Hotel on the Bund in Shanghai. Swatch Group CEO Nick Hayek, China UnionPay Vice Chairman Chen Zhi and Bank of Communications General Manager of Personal Finance Services Department Tao Wen presented the project to the guests and the press at the landmark hotel and site of the watchmaker’s renowned artist-in-residence program. The key players then signed the partnership agreement. The new payment option with SWATCH BELLAMY will be rolled out by the partners across China in the coming months, starting in January 2016.

SWATCH BELLAMY will soon be launched in Switzerland with a Swiss bank and secure transaction partner, as well as in the USA.