Yuan Breaks Four-Day Advance as Leaders Shy Away From Specifics 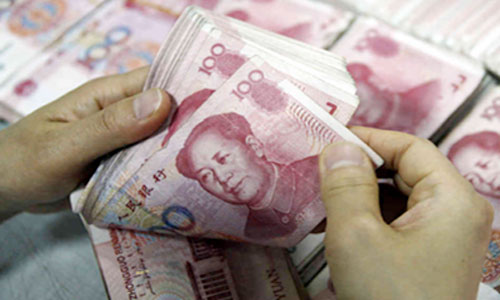 The yuan snapped a four-day run of gains as China’s leaders refrained from announcing specific support measures at their biggest gathering of the year.

The nation will push ahead with efforts to make the yuan more convertible and promote its use overseas over the next five years, according to a development plan released at the National People’s Congress on Saturday. The currency will remain stable against a basket of exchange rates, People’s Bank of China Deputy Governor Yi Gang said on Sunday, using a line that has been repeated by several officials over the past few months.

The currency fell 0.09 percent to 6.5127 a dollar as of 9:52 a.m. in Shanghai, ignoring the strongest central bank fixing in two months, according to China Foreign Exchange Trade System prices. The offshore yuan traded in Hong Kong dropped 0.05 percent to 6.5059. The PBOC raised the currency fixing by 0.26 percent to 6.5113.

“This is typical China style, they are not being inconsistent,” said Zhou Hao, an economist at Commerzbank AG in Singapore. “The government thinks the market is too demanding. It’s in their interest to follow a path of gradual reform and re-anchor market expectations, and if that means repeating references to the basket of currencies or keeping the currency stable, then so be it.”

Strategists were also looking for more transparency on how the central bank sets the yuan’s daily reference rate, which restricts onshore moves to 2 percent on either side. While the PBOC announced in August that it is making the mechanism more market-driven, ING Groep NV last month said the system was as “black-box as ever.”

“The lack of prominence for currency policy at the NPC does not preclude further drama later this year,” said Sean Callow, a foreign-exchange strategist in Sydney at Westpac Banking Corp. “If our base case is correct that the Federal Reserve hikes rates in June, this should boost the dollar against major and Asian currencies.”

Data due later Monday are forecast to show China’s foreign-exchange reserves declined to $3.19 trillion in February as the nation backed the yuan. The stockpile includes the euro, yen, pound and developing nations’ assets, in addition to U.S. dollars, the PBOC’s Yi said over the weekend. This is the first time that a central bank official is disclosing the sources of non-dollar assets in the stockpile.