The Tiny Malaysian Island That Wants to Be a Tax Haven

In the secretive world of offshore tax havens, the tiny Malaysian island of Labuan is doing something curious: seeking the spotlight.

Top executives of the Labuan International Business and Financial Centre have been on a tour of major cities across Asia since late April, touting the benefits of domiciling businesses on a 36-square-mile island off East Malaysia that taxes profits at just 3%.

The pitch at a recent presentation in Hong Kong included a glossy 36-page book ticking off the perks of setting up a Labuan-based trust, leavened by photos of vintage Ferraris and Lamborghinis. Labuan keeps no public register of trusts and private foundations established within its perimeter. Investment vehicles on the island face no tax. There is an 18-hole golf course there—quite tough, according to the deputy director-general of the Labuan Financial Services Authority.

The roadshow, only Labuan’s third in its 26-year history as a financial center, comes at a tense time for the offshore industry. The “Panama Papers”—a massive document leak from a Panamanian law firm made public in April—named a number of high-profile public figures around the world who have quietly parked cash outside their countries using offshore firms. Though legal in many forms, offshore firms have been used to evade taxes and funnel illicit funds abroad, making them a lightning rod for public suspicion.

Labuan’s bid for attention also coincides with an escalating controversy in Malaysia over government investment fund 1MDB. The fund, launched by Prime Minister Najib Razakin 2009, is under investigation in six countries, including the U.S., over the alleged misappropriation of billions of dollars. 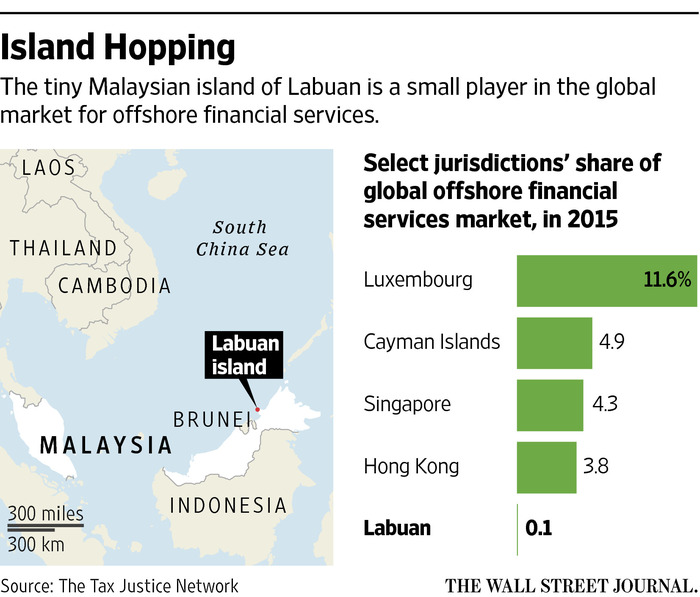 Mr. Najib and 1MDB have denied wrongdoing. The fund has said it is cooperating with investigators. Malaysia’s attorney general cleared the prime minister of any wrongdoing.

Labuan was caught in political crossfire this April when one of Mr. Najib’s cabinet ministers pointed to the island in an apparent jab at former Malaysian Prime Minister Mahathir Mohamad, who has called on Mr. Najib to resign over the 1MDB scandal.

“…If placing money in tax havens were a crime, then Labuan, the brainchild of Tun Dr Mahathir Mohamad, would need to be closed down,” said Malaysia’s communication minister Salleh Said Keruak.

Labuan officials say they aren’t focused on the 1MDB controversy.

“We are a financial-services center,” Mr. Danial said. “We don’t get involved in politics.”

Labuan officials also say they welcome calls for increased transparency in the offshore industry and believe now is a good time to promote the island’s focus on Asian businesses and the region’s fast-growing ranks of wealthy individuals. More than 70% of the companies registered in Labuan originate from Asia, they say, adding the cost of operation in Labuan is one-third that of Hong Kong or Singapore.

Malaysia’s status as a center for Islamic finance is also a selling point: Business services and structures are available in both conventional and Shariah-compliant forms.

“You can’t sell secrecy anymore, and we were never secretive,” said Mr. Danial.

Established in 1990, Labuan is a small player in a region known for its business-friendly financial centers. The London-based lobby Tax Justice Network says Labuan offers a level of secrecy about such things as company ownership similar to that of Hong Kong or Singapore.

The tax-transparency lobby  estimates Labuan accounts for less than 0.1% of the global market for offshore financial services, compared with nearly 4% for Hong Kong, which ranks second on a tax-havens index the lobby compiled last year. Singapore ranks fourth, ahead of the Cayman Islands. Labuan ranks 18th, behind Japan and Germany.

Mr. Danial said Labuan seeks not to compete with the likes of Hong Kong and Singapore, but to complement them. A lawyer in Hong Kong, for instance, could use a Labuan-based foundation to safeguard the assets of a local private wealth client.

“If I said we are competing with Singapore, I would be lying,” he said.

It is also roughly the number of companies incorporated in the British Virgin Islands in the fourth quarter of 2014 alone, according to the BVI Financial Services Commission.