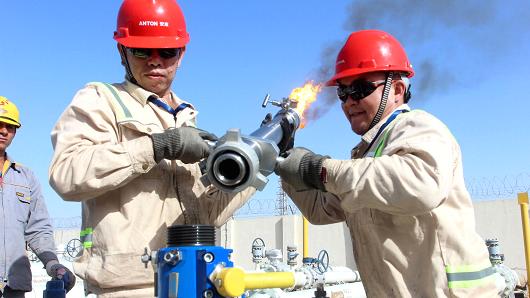 Oil’s recent dip back into the $30s per barrel may be enough to get some OPEC members to curb their bickering and consider joint action — especially if oil plummets again.

Considering a deal and agreeing to one are two different things, but talk that the cartel would discuss its options sparked a rally in oil prices Monday.

“All of a sudden, the price narrative was divergent from the OPEC message. They see the wisdom of changing the rhetoric … It’s no surprise they’d go back to the playbook that worked successfully,” said RBC’s head of commodity strategy Helima Croft.

After recovering from the winter’s lows, oil plunged back into bear market territory last week, and reports surfaced that the cartel plans to meet on the sidelines of an energy conference in Algeria in late September.

“One thing they really could do is bring forward the Venezuelan proposals to explore production bands for individual countries,” said Croft. She said they would not likely take action but could form a committee to study the Venezuelan idea.

“Even talk of a new mechanism would be enough to change the sentiment if you have people thinking OPEC might be out there and be relevant again. The thing I took away from June was they were saying, ‘Don’t assign us to the dustbin. We’re still relevant,'” said Croft.

But since OPEC agreed in November if 2014 to let the market set oil prices, some of the hardest hit members have worked unsuccessfully to bring about an oil production freeze that would give OPEC more control over pricing through production.

Saudi Arabia, OPEC’s biggest exporter, successfully led the cartel to end production quotas and leave pricing to the market. But OPEC members and non-members alike continued to pump high levels of oil, flooding the market with even more crude and driving the price down into the upper $20s per barrel in February of this year.

Saudi Arabia has repeatedly said it would not agree to any deals on production unless all producers agreed. At the same time, Iran has refused to agree to curb production since it has been in the process of returning the barrels to market that it was unable to export while under sanction for its nuclear program.

Iran’s re-entry has been met with price wars as producers struggle to hold and build market share. “There’s still this incredible battle. This is the problem with having U.S. production and having less demand in the U.S. Everything becomes a battle for Asia. It’s also internally with in OPEC. Iraq has been stuffing a lot of barrels into China. It’s a fierce battle for Asian market access. They’re competing against Russia,” Croft said.

‘There may be a little bit more to it this time’

Non OPEC Russia, the world’s largest producer, would be key to any production deal, and Russian Energy Minister Alexander Novak was quoted as saying Moscow would be willing to discuss a freeze if prices fall further. The Wall Street Journal reported that Novak told journalists Russia has always taken the position it is ready for negotiations.

Novak also reportedly said that he could meet his Saudi counterpart, Khalid al-Falih, in September.

OPEC’s feuding has kept it from coming up with any deals, despite its talks at OPEC’s general meetings and at an April special meeting in Doha. But oil’s drop from its high in the $50s this spring to the upper $30s this summer may provide motivation.

“There may be a little bit more to it this time. I’m still very skeptical, but it’s just with Iran being where they are production-wise, they’ll be more inclined to eventually go along with a deal,” said Again Capital’s John Kilduff.

But Iran is close to bringing back all the barrels it could not export while under sanctions for its nuclear program. Saudi Arabia also may have new motivation now that it is working to make its new domestic economic plan work, and it does not want oil to be too low ahead of the planned IPO of Saudi Aramco next year, analysts said.

“The IPO is definitely a consideration. This next trip down (in price) could push them back into each other’s arms,” said Kilduff.

Some unnamed OPEC officials were quoted Monday as saying a freeze is not in the cards. “So much of this is a joke. If they strike a freeze at these levels, we’re at record (production levels). Saudi is at 10.5 million. Iran is coming back and if the hike is U.S. rig counts keep coming, it’s more of the same,” Kilduff said.

“The market has richly rewarded this rhetoric, and you can’t argue that,” he said.

Croft said a sharp drop will be needed before OPEC would do anything.

“I’d suspect they will revive the discussions about potential new mechanisms. I certainly think if the market stalls out in the $40s, or if we move lower they could do something,” she said.

Analysts have said oil could take another leg down as refineries shut some operations in order to switch to winter fuel.

“Our view is the market is oversold at this point,” Croft said, adding that the market is coming in to balance. But the refinery maintenance season is still ahead, and there will be a drop in demand, with inventories still needing to be worked off.

Mike Dragosits, senior commodity strategist at TD Securities, said he doesn’t think OPEC will need to do a deal, despite the efforts being put forth by Venezuela and Ecuador. Venezuela is a concern for oil the oil market, since its economic problems and political instability have cut into production and make investment impossible.

“In my mind, it’s not necessary. Demand is growing and U.S. production is still in decline. I think we may see that in the second of the year, it’s a more balanced market,” he said.

Dragosits said there’s no sign that Iran or Saudi Arabia are backing a meeting or a deal.

“It’s not clear in my mind how much impetus there will be for all members to agree, particularly Iran and Saudi Arabia on this production cap, but I think they’ll continue to leak out rumors,” he said.

As for OPEC, it did not immediately return phone calls, but al-Sada was quoted in the Wall Street Journal as saying that “OPEC continues to monitor developments closely, and is in constant deliberations with all member states on ways and means to help restore stability and order to the oil market.”