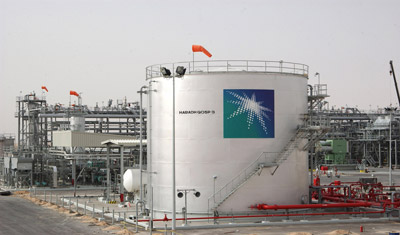 The crown jewel among America’s oil refiners may soon be owned by Saudi Arabia.

Saudi Aramco, the state oil company of OPEC’s most powerful player, recently announced plans to take full control of the sprawling Port Arthur, Texas refinery. The Gulf Coast facility is the largest refinery in the U.S. and can process 600,000 barrels of oil a day.

Port Arthur has great strategic value, especially given the American oil boom that has eased U.S. appetite for foreign oil.

It will give the Saudis complete control over the refinery. They could then likely bring more of their own crude oil into the U.S. for refining and selling in the North American market.

“Saudi Arabia would have an anchor tenant for much of their crude oil production,” said Tom Kloza, global head of energy analysis at the Oil Price Information Service. “Port Arthur is the jewel the Saudis would like.”

Last year Port Arthur made headlines for joining a nationwide worker strike over safety concerns. The worker unrest followed an extensive five-year makeover at Port Arthur that was completed in 2012 and doubled the facility’s capacity.

Saudi Aramco already owns half of the Port Arthur refinery along with Royal Dutch Shell (RDSA)through a joint venture called Motiva Enterprises. But the two oil giants have had a contentious relationship for many years. Last week they announced a letter of intent to break up Motiva.

That makes sense given the fact Shell and Aramco have different sources of oil. While the Saudis would probably prefer Port Arthur to process its own oil shipped from the Middle East, Shell is pumping tons of oil from the deep waters of the Gulf of Mexico.

The Motiva break-up could also be an early step towards Saudi Aramco’s plans to go public. In January Saudi Arabia said it’s considering selling shares of the state-owned oil giant.

Kloza said Motiva could be among the first assets spun off from Aramco, which controls an incredible 261 billion barrels of proven reserves in Saudi Arabia — or roughly 15% of the world’s total.

Another layer in complex U.S.-Saudi relationship

The Port Arthur deal could only add to the complex and sometimes-awkward energy relationship between the U.S. and Saudi Arabia.

On the one hand, Saudi Arabia has long been a source of oil for America. The U.S. imported 1.2 million barrels of Saudi oil per day as of the end of February, according to the U.S. Energy Information Administration. That’s nearly twice as much as the year before.

But U.S. output of its own oil has nearly doubled over the past decade, creating an epic supply glut. And OPEC, led by the Saudis, has refused to cut production to prevent prices from crashing.

That’s hurt the American oil industry, which is in a severe downturn.

But the Saudis have continued pumping aggressively in an effort to squeeze high-cost producers in the U.S. and elsewhere.

The Port Arthur deal will give the Saudis another avenue for their crude.

“It seems like a relatively astute move by the Saudis. It’s an indication of how much they want to keep a foothold in the U.S.,” said Matthew Smith, director of commodity research at ClipperData.