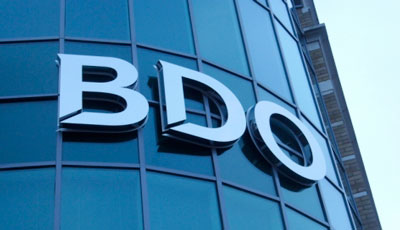 Accountancy and business advisory firm BDO LLP, which saw new managing partner Paul Eagland take position on Monday, has announced double digit growth in profits as investment in talent and technology pays off, according to its annual results published today.

The firm continues to make significant progress in profitability too. BDO’s profits grew 22% to £80.3m compared to £65.6m last year. As a result, average profits per equity partner (PEP) increased by 29% to £360k.

Across the business, BDO has made more than 500 promotions in the last year and saw 700 trainees move up the ranks through its graduate and school leaver programmes.

Paul Eagland, managing partner at BDO LLP, says: “The results are testament to our partners and people who have worked diligently and passionately over the course of the year helping our clients succeed. The increase in profits reflects a return on the firm’s investment and ongoing focus on sustainable, profitable growth.”

Growth across the business

The firm’s tax business continued to expand, following 20% growth the previous year. The team, which now has revenues of £126m (compared to £119m last year), continues to invest in talent to meet client demand with seven new tax partners joining the firm during the summer.

Eagland adds: “The ambitious and high-growth businesses we work with – many of which are in the mid-market, AIM-listed or PE-backed – have continued to succeed despite uncertainty in global markets, the EU referendum and government changes at home. This, in addition, to significant regulatory changes has created opportunities for both BDO and our entrepreneurially-spirited clients.”

Changes at the top

Last week, Simon Michaels stepped down from his role as managing partner after completing the maximum two four-year terms in position.

Under Simon’s leadership, the firm completed the first proactive strategic merger in the accountancy market for more than a decade when BDO merged with PKF in 2013.

BDO’s gross revenues have increased by 50% in his second four-year term, surpassing the £400m target he had set for the firm. BDO has also been successfully ranked as number one for client satisfaction for the last four years, outperforming all its major competitors

Paul Eagland stepped up to the managing partner position on 1 October after almost 30 years at BDO. A key member of BDO’s leadership team for the last eight years, Paul has held a number of senior roles in the business.

Commenting, Paul Eagland said: “Simon has not only steered the firm through a turbulent eight years of domestic and global uncertainty, but he steps down as managing partner having grown a values-led, sustainably profitable business with a strong balance sheet. This will support continued targeted investment and a focus on attracting and retaining the very best talent. BDO is in a strong and exciting position for my first term as managing partner. Our focus will be on helping people and businesses succeed.”

Investment in people and technology

BDO has promoted 538 people from within the business and welcomed 334 new trainees, including 66 on its award-winning school leaver programme. It is also set to recruit 25 new partners to the business in the next 12 months.

Driving profitable growth is at the centre of its investment in technology and innovation. The development of global web-based audit tool, BDO Advantage – a data analytics tool – and its UK cloud accounting service BDO InTouch, which launched last year and has already expanded into Australia, New Zealand, South Africa, has seen the firm reap the rewards. The firm has recently also announced a worldwide strategic alliance with Microsoft to accelerate its ongoing digital transformation.

Eagland adds: “The people we attract and the technology we deploy is changing the face of accountancy at rapid speed. We are investing heavily in these advances to add even more value to our clients, but importantly we’re doing them in areas and market segments we understand and believe in.”

BDO works for a third of FTSE 350 companies in an advisory capacity but remains committed to its mid-market, private equity, AIM-listed, high-growth heartland.

“Developments in technology and regulation, an uncertain relationship with the EU and the increasing pace of globalisation means that many of the boundaries that once governed the way organisations do business are changing or disappearing altogether. There are exciting times ahead and we look forward to helping our clients navigate new and unfamiliar territory.”

Globally, BDO’s international network continues to go from strength to strength. In its last financial year, the network grew by nearly 13% through both organic and acquisitive growth, reporting revenues of $7.3bn and employing 64,500 people across 154 countries.