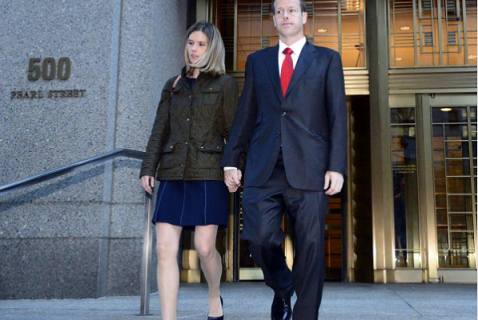 An Ivy league-educated financier who defrauded friends, family and even a 9/11 victim’s relatives of more than $38 million to feed a gambling habit was sentenced Friday to four years in prison by a Manhattan federal judge.

Andrew Caspersen, who worked at investment banker Paul Taubman’s PJT Partners Inc. before his arrest in March, was sentenced by U.S. District Judge Jed Rakoff in Manhattan after pleading guilty to charges including securities fraud.

“No purpose will be served by letting him rot in prison for years on end,” Rakoff said.

He gave Caspersen four years due to his addiction.

The 39-year-old started a Ponzi scheme in 2014, paying a high rate of return on initial investments in order to get more money to give him dough but he used the money to make daring bets on the stock market that failed.

Caspersen has “a very real gambling disorder and was “not acting with a full deck.”

He noted that Caspersen at one point made so much money that he could have paid back all the money he stole and still have $50 million left.

Caspersen’s lawyer, Paul Shechtman, said that for the past 20 years, his client has lost tens of millions of dollars — including his own inheritance — by repeatedly taking big gambles on Wall Street in trading bets that “bordered on madness.”

Prosecutors conceded that Caspersen is addicted but said he never seriously tried to reform until he was arrested.

In a shaking voice, Caspersen pleaded for mercy but also apologized to his victims saying he had abused their trust.

“For almost 20 years, I alone gambled away everything I ever loved and treasured,” he said.

Rakoff said Caspersen, a graduate of Groton, Princeton and Harvard, must report to jail Jan. 4 and eventually make restitution of tens of millions to his victims.

Just before his March arrest, Caspersen drafted a suicide note to his wife and a letter to his creditors saying he was “deeply ashamed,” court papers said.

Among those who lost money from Andrew Caspersen’s scheme were his own mother, the parents of an ex-girlfriend who died in the 9/11 attacks and billionaire hedge fund operator Louis Bacon’s non-profit, the Moore Charitable Foundation.