Bitcoin is Now Trading at its Highest Price Since 2014

The price of bitcoin hit two major milestones today, reaching a new 2016 high and rising to its most elevated level since February 2014.

The figure not only surpassed the previous 2016 high of $781.31, but also represented bitcoin’s most elevated value since this summer, when expectations were high about the digital currency’s upcoming decline in rewards.

However, with today’s movements, bitcoin has finally broken through after weeks of flirting with its previous annual high. The digital currency neared $781 several times this month, but up until now, has been unable to surpass it.

Bitcoin prices came within roughly $2 of this previous high yesterday, and then broke through it at 01:45 UTC today, BPI figures reveal. After surpassing this level, the digital currency generated additional gains.

Now that bitcoin prices has surpassed the previous high of $781.31, this price could become a new support level for the digital currency.

Whether this support materializes or not, bitcoin prices have generated very strong returns so far this year, rising more than 80% from roughly $430 to more than $780. 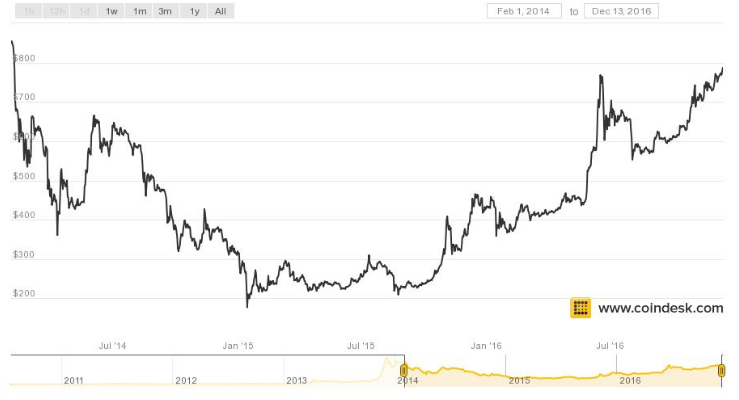 Source: CoinDesk – Bitcoin is Now Trading at its Highest Price Since 2014