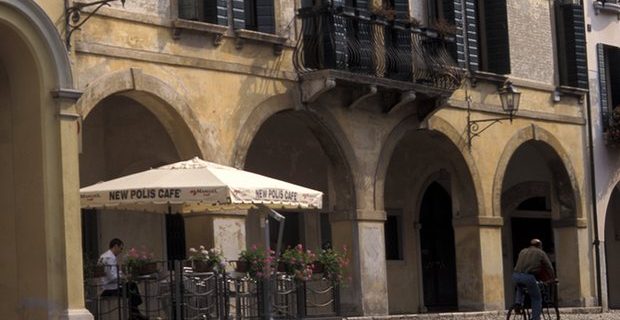 Goethe once wrote that where there is much light, there is also strong shadow.

But for shop owners in Conegliano, a town in Veneto known for its dry prosecco, the emission of light – and shade – has taken on a meaning that is far less poetic and far more fiscal.

For two years now, small business owners in the town have been paying a local tax on shadow. The levy, about €100 (£87) per year, has been paid by shopkeepers – largely unbeknown to them – whose signs create shade on public walkways.

Now, with the help of a business association that is opposed to the tax, some are fighting back and refusing to pay. The tax is not being charged to store owners for the shade created by their awnings or just for those who put tables or a chair outside their shop – there are other taxes on those – but for anyone who has a sign on their door or shop window that creates shade.

“It is not because of the money, it is the principle,” said Luca Ros, who heads the association of small shop owners.

The issue could easily be mistaken for farce: notoriously bureaucratic Italy is taxing small business owners for light, or lack thereof. But there is a serious side to the levy, which to Ros and others is a symbol of the endless challenges facing struggling shop owners in the historic centre of Conegliano and a local administration that is desperate to prop up its coffers after years of economic stagnation.

“It’s not the right way to get the money they need. They can cut costs, or do it in a different way” Ros said.

The tax is not technically unique to Conegliano. It is being levied under a 1993 law that Ros said could be implemented across Italy, but in this case is being applied very strictly by local officials.

He said business owners had not really considered the tax for the last two years, in part because it is a small sum, and because fighting the tax has been considered a far more arduous and possibly costly endeavour.

Asked if he believed the tax was like a pizzo – protection money that mafia clans have traditionally used to extort business owners – Ros said the payments were not all that different. “The only difference is that this is legal. We pay for nothing,” he said.

The mayor of Conegliano could not be reached for comment. A telephone recording at the town’s city hall said it was closed.