Last spring, Mahyar Makhzani, a Geneva-based fund manager, placed a 4.08-carat pear-shaped gem against special ultrawhite paper and peered at it through his eyeglass. He liked what he saw.

Several days later, after 10 minutes of negotiation on the telephone with the stone’s New York-based seller, Mr. Makhzani and a business partner bought the vivid-orange diamond for more than $1 million per carat.

Deals like this—high-price purchases of colored diamonds by investors—have become more commonplace in recent years. Colored diamonds, created when a chemical element such as boron or nitrogen is trapped during a diamond’s formation over millions of years, are part of a boom in niche over-the-counter luxury markets that were once the preserve of wealthy collectors.

Prices are being driven higher by investors who are hoping the hot market stays hot, many of whom have been disappointed by returns from other assets, say industry insiders. Over almost eight years, from the start of 2009 to Sept. 30, 2016, the latest recorded data, the price of pink diamonds has increased nearly 180% and sits at a record high. Blue and yellow diamonds are up by around 70% and 90%, respectively, over the same period, according to the Fancy Color Research Foundation, based in Tel Aviv.

Trillions of dollars of stimulus from central banks and ultralow interest rates have helped push returns on many government bonds below zero, leading investors toward ever more esoteric assets. Top-end vintage car prices have increased nearly 460% in the past decade, while classic wine prices have risen around 240%, according to the annual Wealth Report published by London-based property broker Knight Frank. Prices of colored diamonds, the report adds, have risen 122% in the same period. 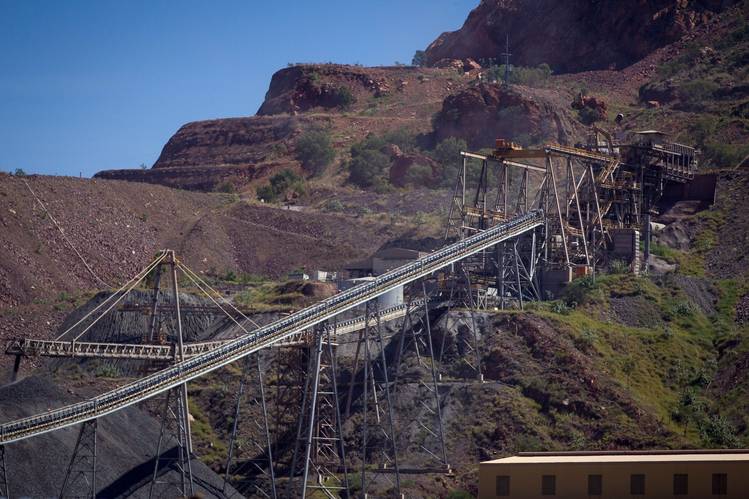 Part of the transformation of the marketplace for colored diamonds has been that professional investors and funds, typically investing on behalf of wealthy clients, have joined the collectors and connoisseurs who historically have bought rare gems. Investors or funds such as Mr. Makhzani’s Sciens Coloured Diamond Fund typically buy the stones outright or in partnership with other investors.

There has “absolutely” been a growth in the number of investors buying colored diamonds, says Eden Rachminov, managing partner of Tel-Aviv-based Rachminov Diamonds, one of the world’s biggest cutters of colored diamonds. Soaring prices have drawn in some investors, he says. “The price of red diamonds is very high. That creates an attraction.”

Record auction prices highlight the soaring demand over the past year. Last May, a 14.62-carat blue diamond sold for $57.5 million at auction in Geneva, making the gem the most expensive jewel ever sold at auction. In November 2015, also at a Geneva auction, the 12.03-carat Blue Moon sold for nearly $50 million, becoming the only diamond to sell for more than $4 million per carat.

In addition to those seeking alternative investments, the swelling ranks of the world’s superrich means more interested buyers, too. In the past, other gems such as sapphires or emeralds adorned with smaller white diamonds were more en vogue, says Daniela Mascetti, senior international specialist at Sotheby’s jewelry division.

But in recent years, investors picked up on the rarity of colored diamonds, Ms. Mascetti says. Just one out of every 10,000 diamonds is a so-called fancy colored diamond, according to the Gemological Institute of America, in Carlsbad, Calif., the globally recognized body for grading diamonds’ color, clarity, finish and cut.

Some, such as red diamonds, are so rare that only a handful are known to exist. The Gemological Institute says its laboratory didn’t see a single red diamond from 1957 to 1987. 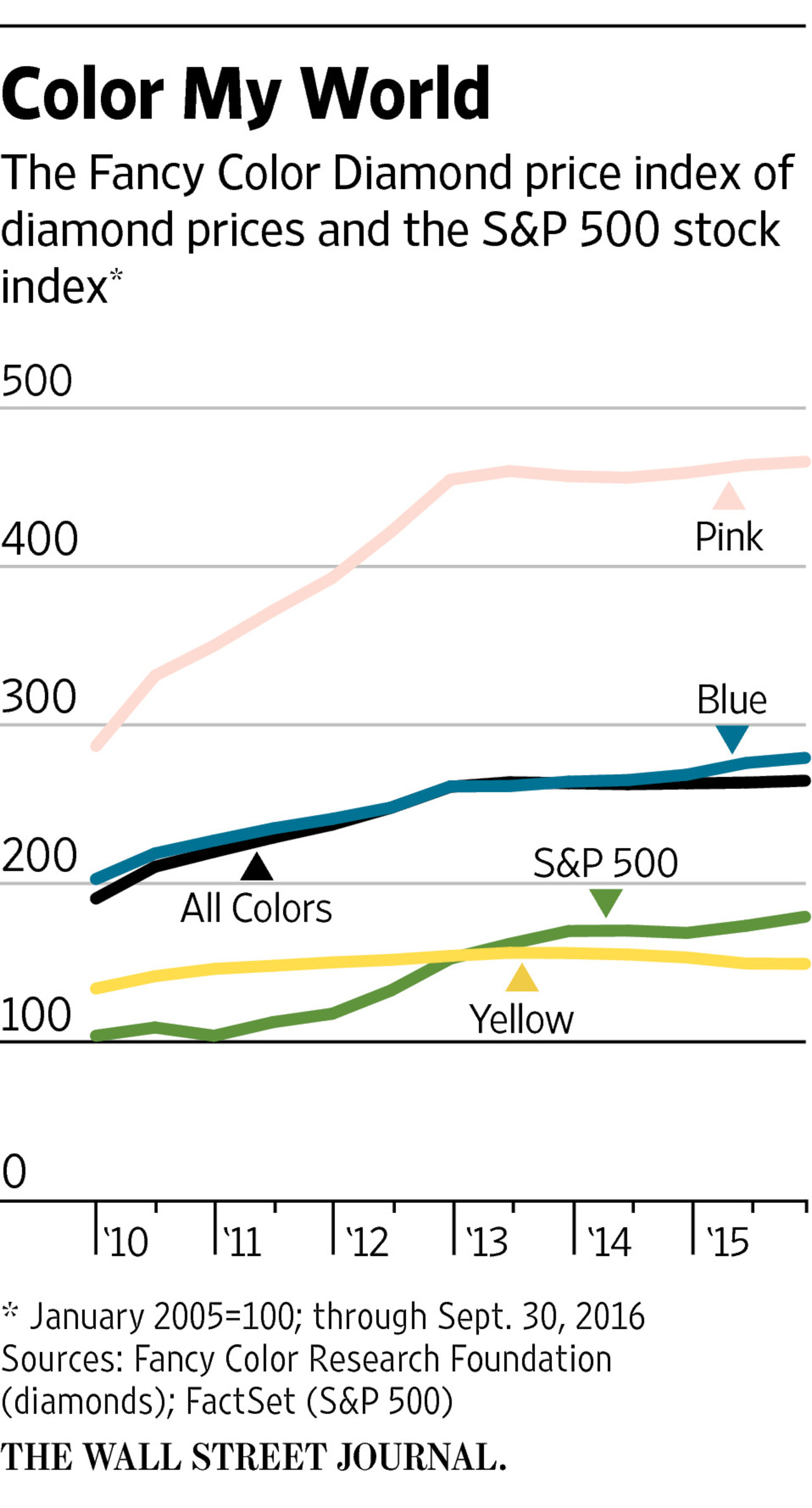 Now, growing demand for colored diamonds has been so strong that brown diamonds, once considered mostly for industrial use, are sold as “champagne,” “cognac” or “chocolate” diamonds and can fetch several thousand dollars a carat.

As with any type of asset, buyers should beware. The burgeoning market for colored diamonds is also one of the most opaque. Just 12% to 15% of deals are done at auction, according to Mr. Rachminov, with the rest being private sales or tenders, making it hard for investors to gauge a stone’s market price.

Supply is tightly controlled. For instance, around 90% of pink diamonds come from Rio Tinto’s Argyle mine in Western Australia, with the rest coming from mines in Africa, Brazil and elsewhere, says Patrick Coppens, sales manager at Rio Tinto.

While Rio Tinto still mines primarily for white diamonds, the ubiquitous wedding-engagement gem, the best 50 or 60 colored diamonds that it digs up every year are sold in an annual tender through sealed bids. Potential investors can attend viewings at secret locations in London, New York and Hong Kong, one of which was attended by a Wall Street Journal reporter. Prospective investors, one at a time, are allowed to examine the diamonds in a windowless room. 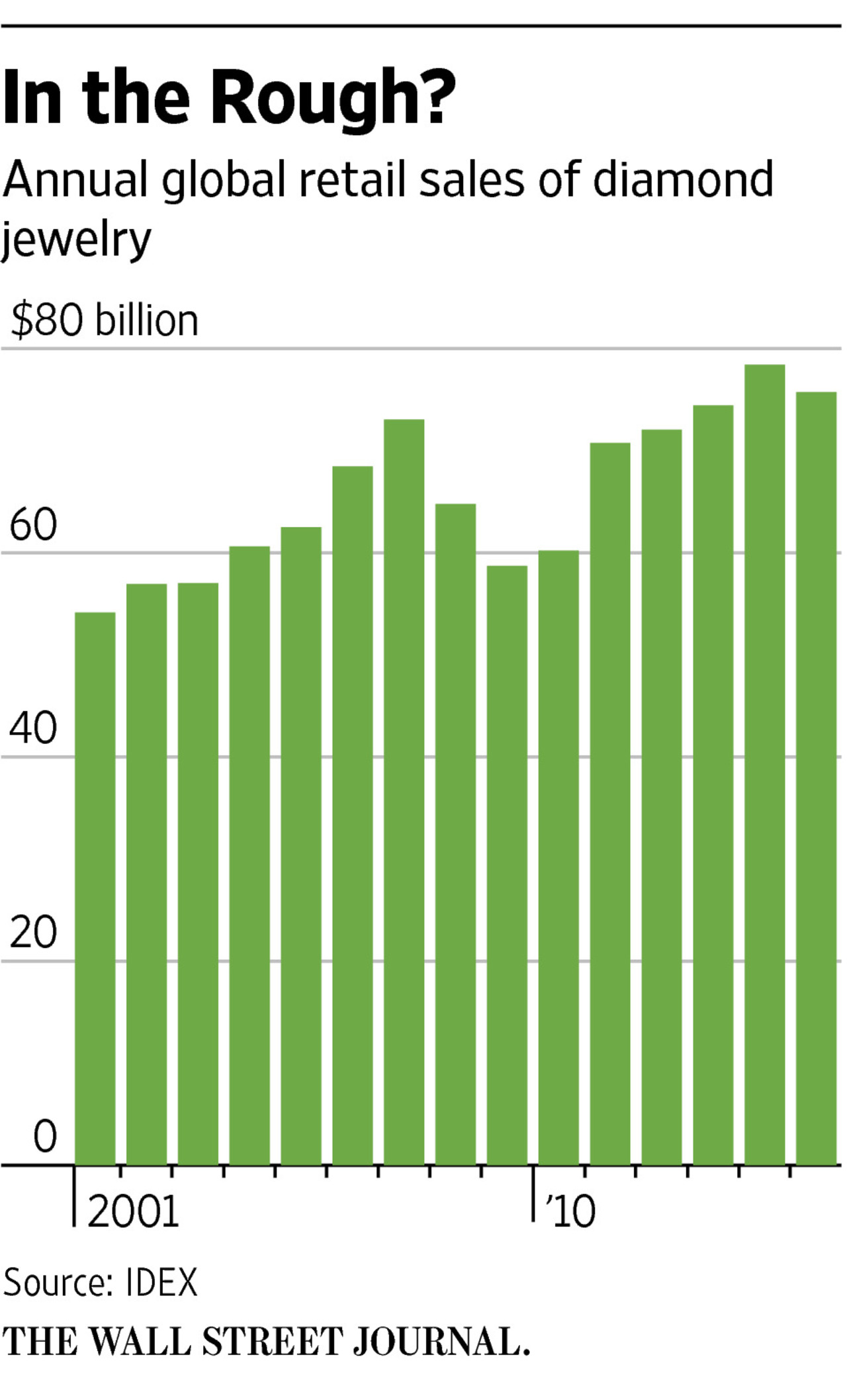 “It’s an excellent marketing strategy,” says Mr. Coppens, who is based in Antwerp, Belgium, one of the world’s diamond capitals.

The rest of Rio Tinto’s colored diamonds, numbering into the hundreds, are sold to around 15 groups that Rio regularly deals with, he says.

Mr. Rachminov is one of these authorized dealers. His company’s agreement with Rio Tinto gives him a consistent supply of small pink diamonds, he says. But he also buys unpolished stones from brokers.

“In bad times, it’s a very good place to keep your money,” he says. “In good times, it’s something to enjoy.”