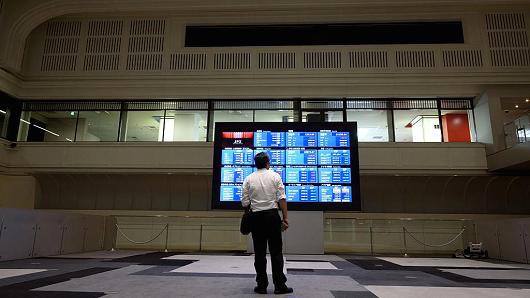 Asian stock markets climbed as oil recovered some of its slump and better-than-forecast trade figures in Japan boosted optimism in the global economy. The kiwi dollar surged as inflation in New Zealand accelerated more than forecast.

Japan’s Topix headed for its first weekly gain in more than a month. Australian equities also climbed and Hong Kong shares halted a three-day retreat. Futures on the S&P 500 Index ticked higher after a rout in crude dragged U.S. shares lower, as the plunge in oil eased Thursday. The kiwi climbed after New Zealand inflation reached the central bank’s target for the first time in more than five years.

Japanese exports grew at the fastest rate in more than two years in March, supporting the bullish view in the debate over the health of the global economy. The Federal Reserve’s Beige Book report showed the U.S. economy continued to expand steadily and Fed Vice Chairman Stanley Fischer painted a picture of brightening global growth that can better withstand gradual monetary tightening. BlackRock Inc. boss Laurence D. Fink said lackluster growth in the American economy and uncertainty around the Trump administration’s ability to quickly pass key reforms pose a risk to markets.

Ahead of the first round of voting in France’s presidential election this weekend, polling is suggesting it will be a close call. Every poll for the past month has shown independent Emmanuel Macron and the National Front’s Marine Le Pen taking the top two spots. Macron would then easily win the May 7 runoff, polls show. Yet both front-runners have been steadily slipping over the past two weeks, and Republican Francois Fillon and Communist-backed Jean-Luc Melenchon are now within striking distance.

Upcoming events that investors will be watching: