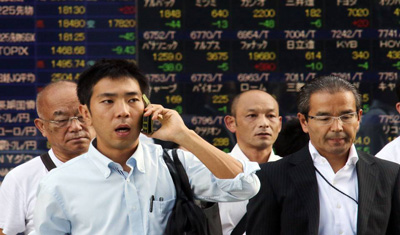 Chinese equities rose as optimism over infrastructure spending offset concerns over the strength of the global economy, while oil surged on expectations for a supply cut.

China shares trading in Hong Kong advanced to the highest level since March. Tokyo shares pared losses as the yen erased an earlier gain. Oil jumped as heads of energy ministries from Saudi Arabia and Russia said an OPEC deal should be extended. Australian government bonds rose for a fourth day, while gold extended a two-day increase.

President Xi Jinping laid out a sweeping framework for Chinese-style globalization, pledging $78 billion in financing. Equities slightly pared gains after data showed China factory output and investment slowed in April. Those reports were the latest after numbers on American retail sales and inflation suggested expectations for global growth may have run too high. North Korea fired a ballistic missile early Sunday, its seventh such test this year.

“The One Belt One Road plan is still at a very premature stage,” Raymond Yeung, chief economist for greater China at Australia & New Zealand Banking Group, told Bloomberg TV in Hong Kong. “But domestically we’ve seen China increasingly shifting back to the original investment-led model, which means they will continue to boost the economy through infrastructure spending. Infrastructure investment will continue to boom.”

The Federal Reserve remains on track to lift interest rates again next month with jobless claims at a 28-year low and the unemployment rate down to 4.4 percent. Still, the odds have fallen to about 70 percent amid evidence the U.S. inflation outlook may be waning.

German Chancellor Angela Merkel’s party won an election in the country’s most populous state on Sunday, highlighting her backing among voters ahead of the national election in September, as she stands up for free trade, vows to hold the European Union together and fends off U.S. President Donald Trump’s attacks in a conflict over defense spending.

Here’s what investors will be watching out for this week: