Virtual currency Ethereum has risen 4,500 percent since the beginning of the year

The price of Bitcoin has hit record highs in recent months, more than doubling in price since the start of the year. Despite these gains, Bitcoin is on the verge of losing its position as the dominant virtual currency.

The value of Ether, the digital money that lives on an upstart network known as Ethereum, has risen an eye-popping 4,500 percent since the beginning of the year. 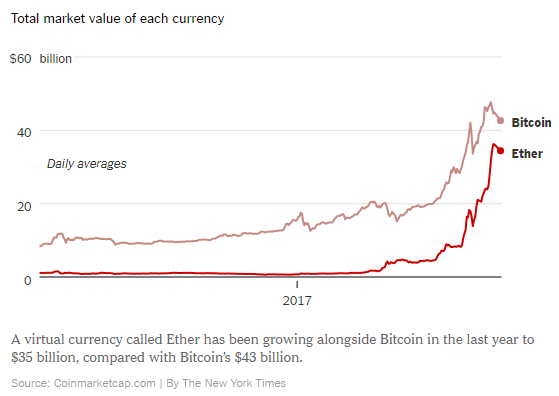 With the recent price increases, the outstanding units of the Ether currency were worth around $34 billion as of Monday — or 82 percent as much as all the Bitcoin in existence. At the beginning of the year, Ether was only about 5 percent as valuable as Bitcoin.

The sudden rise of Ethereum highlights how volatile the bewildering world of virtual currency remains, where lines of computer code can be spun into billions of dollars in a matter of months.

Bitcoin, the breakout digital currency, is also hitting new highs — one Bitcoin was worth $2,600 on Monday. But the Bitcoin community has struggled with technical issues and bitter internal divisions among its biggest supporters. It has also been tainted by its association with online drug sales and hackers demanding ransom.

Against this backdrop, Ether has been gaining steam. The two-year old system has picked up backing from both tech geeks and big corporate names like JPMorgan Chase and Microsoft, which are excited about Ethereum’s goal of providing not only a digital currency but also a new type of global computing network, which generally requires Ether to use.

If recent trends continue, the value of Ethereum’s virtual currency could race past Bitcoin’s in the coming weeks. Virtual currency fanatics are monitoring the value of each and waiting for the two currencies to switch place, a moment that has been called “the flippening.”

“The momentum has shifted to Ethereum — there is no doubt about that,” said William Mougayar, the founder of Virtual Capital Ventures, which invests in a variety of virtual currencies and start-ups. “There is almost nothing you can do with Bitcoin that you can’t do with Ethereum.”

Even though most of the people buying Ether and Bitcoin are individual investors, the gains that both have experienced have taken what was until very recently a quirky fringe experiment into the realm of big money. The combined value of all Ether and Bitcoin is now worth more than the market value of PayPal and is approaching the size of Goldman Sachs.

Investors buying Ether are placing a bet that people will want to use the Ethereum network’s computing capabilities and will need the currency to do so. But that is far from a sure thing. And real-world use of the network is still scant.

Bitcoin, on the other hand, has made inroads into mainstream commerce, with companies like Overstock.com and Expedia accepting Bitcoin for purchases, along with the black-market operators who use the currency.

The fact that there are fewer real-world uses for Ethereum has many market experts expecting a crash similar to the ones that have followed previous run-ups in the price of Bitcoin and other virtual currencies. Even during recent pullbacks, though, the value of Ether has generally continued to gain on Bitcoin in relative terms.

Ethereum was launched in the middle of 2015 by a 21-year-old college dropout, Vitalik Buterin, who was born in Russia and raised in Canada. He now lists his residence, jokingly, as Cathay Pacific Airlines because of his travel schedule.

The Ether he holds has made him a millionaire many times over, but he has generally avoided commenting on the price increase in Ether.

Mr. Buterin was inspired by Bitcoin, and the software he built shares some of the same basic qualities. Both are hosted and maintained by the computers of volunteers around the world, who are rewarded for their participation with the new digital tokens that are released onto the network each day.

Because the virtual currencies are tracked and maintained by a network of computers, no government or company is in charge. The prices of both Bitcoin and Ether are established on private exchanges, where people can sell the tokens they own at the going market price.

But Ethereum was designed to do much more than just serve as a digital money. The network of computers hooked into Ethereum can be harnessed to do computational work, essentially making it possible to run computer programs on the network, or what are referred to as decentralized applications, or Dapps. This has led to an enormous community of programmers working on the software.

One of the first applications to take off was a user-led venture capital fund of sorts, known as the Decentralized Autonomous Organization. After raising over $150 million last summer, the project crashed and burned, and appeared ready to take Ethereum with it. 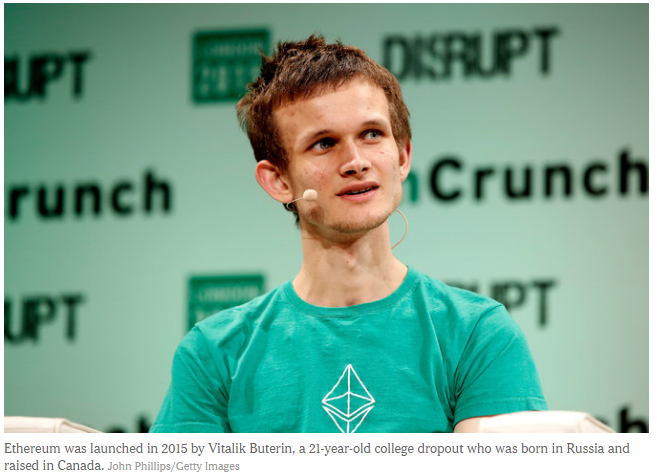 But the way that Mr. Buterin and other developers dealt with the problems, returning the hacked Ether to users, won him the respect of many in the corporate world.

“It was good to see that there is governance on Ethereum and that they can fix issues in a timely manner if they have to,” said Eric Piscini, who leads the team looking into virtual currency technology at the consulting firm Deloitte.

Many applications being built on Ethereum are also raising money using the Ether currency, in what are known as initial coin offerings, a play on initial public offerings.

Start-ups that have followed this path have generally collected Ether from investors and exchanged them for units of their own specialized virtual currency, leaving the entrepreneurs with the Ether to convert into dollars and spend on operational expenses.

These coin offerings, which have proliferated in recent months, have created a surge of demand for the Ether currency. Just last week, investors sent $150 million worth of Ether to a start-up, Bancor, that wants to make it easier to launch virtual currencies. If projects like Bancor stumble, Ether could as well.

Several big companies have also been building programs on top of Ethereum, including the mining company BHP Billiton, which has built a trial program to track its raw materials, and JPMorgan, which is working on a system to monitor trading.

Over the last few months, over 100 companies have joined the nonprofit Enterprise Ethereum Alliance, including global names like Toyota, Merck and Samsung, to build tools that will make Ethereum useful in corporate settings.

Many of the companies using Ethereum are building their own private versions of the software, which won’t make use of the Ether currency. Speculators are betting that these companies will eventually plug their software into the broader Ethereum network.

There is, though, also the possibility that none of these big trials come to fruition, and the current excitement fizzles out, as has happened many times in the past with Bitcoin after big price surges.

“I hope this is the year where we start to close the gap between the speculative value and the actual value,” Mr. Mougayar said. “There is a lot at stake right now.”

Source: The New York Times – Move Over, Bitcoin. Ether Is the Digital Currency of the Moment