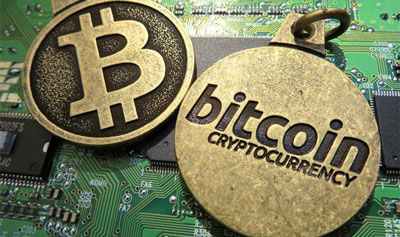 BlackRock, the $5 trillion asset manager, has not traditionally paid much attention to cryptocurrency platforms such as Bitcoin and Ethereum. Now that the prices of those blockchain-based currencies have risen exponentially in recent months, however, even BlackRock’s top economists are watching closely—and with some concern.

“I look at blockchain, I look at the charts, and to me that looks pretty scary, and reminiscent of what we’ve seen before,” he said, referring to the characteristics of previous market bubbles, such as the dot-com boom of the late 1990s.

It’s that kind of nervousness that has helped deflate some of the recent crypto enthusiasm, which this year alone propelled the Bitcoin price up more than 200% to an all-time high of $3,000 in June, and Ethereum up more than 5,100% to a peak above $400. Just days after setting those records, though, Bitcoin and Ethereum crashed as much as 25% in a single day, and have so far been unable to recover.

The Ethereum price is currently under $190, down more than 50% from its high less than a month ago. Bitcoin now trades at about $2,280, 24% below its peak. (But even with the selloff, the cryptocurrencies have still delivered spectacular returns in 2017 to date: the Bitcoin price has more than doubled since the start of the year, while Ethereum is worth more than 23 times its value at the end of 2016.) 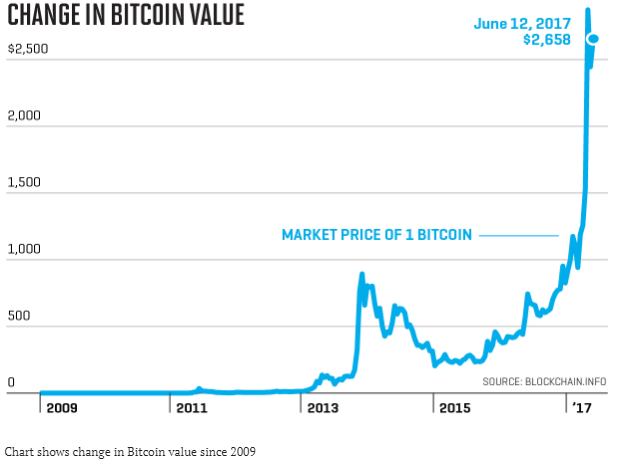 BlackRock, the world’s largest asset manager, is far from the first to express alarm over the rapid appreciation in the value of cryptocurrencies, which are estimated to exceed a combined $100 billion—greater than the stock market value of Goldman Sachs (GS, +0.49%). In early June, Mark Cuban tweeted about cryptocurrency, “I think it’s in a bubble,” prompting the price of Bitcoin to swoon 5%. Two weeks ago, billionaire investor Michael Novogratz, who has 10% of his wealth invested in Bitcoin and Ethereum, said he’d been selling many of his coins, suspecting that the digital currencies had already peaked for the year. Cryptocurrency, Novogratz further predicted, “is going to be the single greatest bubble of our lifetime.”

Last week, Goldman Sachs itself weighed in, warning that Bitcoin could fall another 19% from its current levels, to as low as $1,857.

Still, if cryptocurrency really is in a bubble, it poses less of a danger to the rest of the market if it pops than other bubbles—from housing to tech stocks—have historically when they burst. After all, unlike stocks and bonds, which are intricately entwined with big banks and the world financial system, Bitcoin and Ethereum exist in almost a parallel universe to conventional assets, with only tenuous links to traditional Wall Street.

“If the price went to zero tomorrow,” Turnill noted, there likely would be no “broader financial impact at all” on any other assets. “But it’s an example of where you’re getting big price movements in the market,” he said.

Indeed, that’s why BlackRock is keeping tabs on cryptocurrency in the first place: Not as a prospective investment at this time, but as a potential indicator of sentiment and investor behavior in other asset classes—whether gold, standard paper currency, bonds, or technology stocks.

Bitcoin “can be a signal of the macro environment,” Jeffrey Rosenberg, BlackRock’s chief fixed income strategist, added at the briefing. “So we do take a look at it.”