The Euro and the Yen slightly slipped to Dollar; Asian Stocks rise 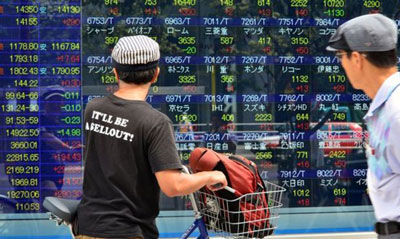 Asian stocks look set to close out a lackluster week on a positive note on Friday as investors continue to debate the outlook for central bank policy normalization and the impact of higher bond yields.

The MSCI Asia Pacific Index rose as equities climbed in Tokyo, Hong Kong, Sydney and Seoul. The U.S. offered little fresh direction overnight, with the S&P 500 Index closing just in the green, after losing most gains for a fourth straight day in afternoon trading. The dollar, which has got some support this week from higher Treasury yields, dropped on Thursday and is little changed Friday. Ten-year U.S. yields remain near their highest since 2014.

Interest-rate-hike jitters returned to markets after minutes of the Federal Reserve’s January meeting indicated the central bank is confident the economy is strengthening. Subsequent data confirmed that view, but also brought signs of rising inflation, cutting against the long-held view that it will remain short of policy makers’ targets.

“Investors are just nervous about interest rates,” said Paul Nolte, a portfolio manager at Kingsview Asset Management in Chicago. “Everybody is waiting for more economic data to confirm or deny whatever the Fed position is. It’s a big case of the nerves.”

Elsewhere, the euro slipped after minutes from the European Central Bank showed officials continue to lay the ground for a shift in policy language in the first half of the year. Bitcoin fell below $10,000.

Here are some key events scheduled for the remainder of this week: