A review of the main moves in Stocks, Currencies, Bonds and Commodities 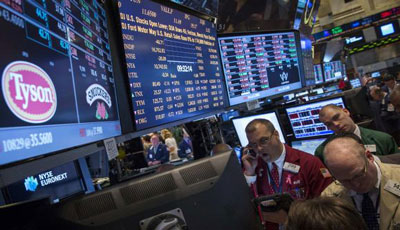 Equities in Asia put in a mixed start to the week as investors sought fresh catalysts after last week’s run to record highs. The British pound took a hit as pressure mounts on U.K. Prime Minister Theresa May after a raft of political scandals and scant progress on Brexit talks.

Stocks in Tokyo deepened a decline going into the close of the session to pull away further from a 25-year high tested last week, with the Nikkei 225 Stock Average dropping the most in six months. Shares in Sydney and Seoul also dropped. Hong Kong stocks were firmer after a reshuffle of the benchmark Hang Seng Index. The dollar trimmed an advance that saw it gain against all its major counterparts. The pound fell the most against the greenback. Australian bond yields tracked an increase in the U.S. at the end of last week.

Some of the euphoria fizzled out of Bitcoin, with the cryptocurrency tumbling 11 percent on Monday, bringing its retreat from last week’s record high to about 26 percent in the wake of the cancellation of a technology upgrade.

Sterling retreated after a report that as many as 40 Conservative MPs have agreed to sign a letter of no confidence in May, almost enough to trigger a leadership challenge. Meanwhile, the U.K. Labour Party accused May of lacking the support within her Conservative Party to deliver the Brexit transition period she’s proposed. The news kick starts a week that also features a slew of Bank of England members speaking, along with updates on U.K. inflation, the labor market and retail sales.

Also in focus this week for investors: continuing talks on tax legislation in the U.S. Congress, along with American inflation and growth data that will play into the Federal Reserve’s decision whether to lift rates next month. Pessimism over the state of play on U.S. tax cuts helped drag global equities down from this month’s record high late last week. Measures of equity-market volatility have risen, albeit from near record low levels.

Fresh political turmoil in Australia that risked undermining confidence, weighed on the Aussie dollar early in the day. The Australian government’s grip on power weakened after another lawmaker quit in the dual-citizenship saga. Meanwhile, Reserve Bank of Australia Deputy Governor Guy Debelle reiterated in a speech in Sydney the central bank’s view that non-mining investment is picking up. He also said that an interest-rate increase will come from a good economy, not a shock.

U.S. Treasuries could benefit from any weakening in inflation data due on Wednesday, which could also undermine prospects for Fed tightening, according to Morgan Stanley. Philadelphia Fed President Patrick Harker said in Tokyo Monday that for his part, he’s still “lightly” penciling in another hike by year-end.

Here are key events investors are watching this week: