Visualizing the world’s largest importers in 2017

For most world leaders and corporate executives, the swing of the global pendulum to more protectionist policies has been an unpleasant surprise.

That’s because the consensus view from both economists and economic historians has been that measures like the Smoot-Hawley Tariff Act of 1930, which triggered a trade war during the Great Depression, greatly exacerbated circumstances that were already quite dire.

It’s common for tariff increases to be countered by retaliatory measures, and this can often translate to lower levels of international trade and decreased economic growth across the board. During the period of 1929 to 1934, according to the U.S. State Department, world trade decreased by 66% – largely a result of subsequent trade wars after the passing of Smoot-Hawley.

For the above reasons, international barriers to trade have been falling for decades – until now, of course.

Which countries can throw their weight around the most with tariffs and retaliatory measures?

It’s those that import the most goods – and today’s infographic from HowMuch.net shows the world’s largest importers in 2017, according to recently released data from the World Trade Organization. 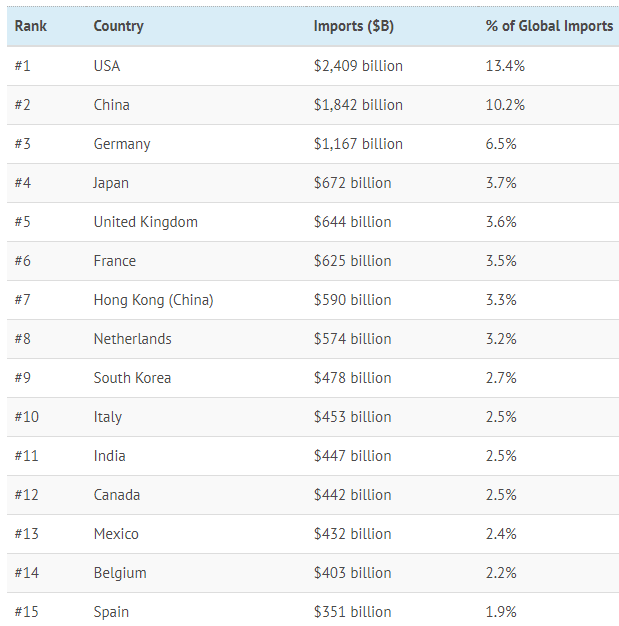 The United States takes home the number one spot with $2,409 billion of imports in 2017, about 13.4% of the global total. It’s worth mentioning that this is $860 billion higher than the country’s exports in 2017, and that the difference between the two numbers is the hotly-debated trade deficit.

After the big three, no other country has a number exceeding 5% of global imports, but Japan, the United Kingdom, France, Hong Kong (China), and the Netherlands all surpass the 3% mark.