Business investment rate up to 23.3% in the euro area

Eurostat, the statistical office of the European Union, has published a report in relation to the business investment rate in the euro area for the third quarter of 2018.

In accordance the report:

In the third quarter of 2018, the business investment rate was 23.3% in the euro area, compared with 23.0% in the previous quarter.

These data come from a first release of seasonally adjusted quarterly European sector accounts from Eurostat, the statistical office of the European Union, and the European Central Bank (ECB). 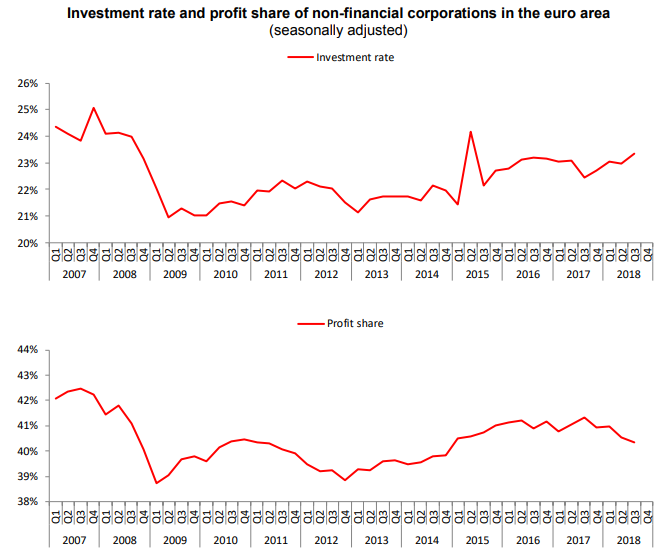 Methods and definitions
The gross investment rate of non-financial corporations is defined as gross fixed capital formation divided by gross value added. This ratio relates the investment of non-financial businesses in fixed assets (buildings, machinery etc.) to the value added created during the production process.

The profit share of non-financial corporations is defined as gross operating surplus divided by gross value added. This profitability-type indicator shows the share of the value added created during the production process remunerating capital. It is the complement of the share of wage costs (plus other taxes less other subsidies on production) in value added.

The compilation of the European sector accounts follows the European System of Accounts 2010 (ESA2010) and covers the period from the first quarter of 1999 onwards.

Institutional sectors bring together economic units with broadly similar characteristics and behaviour, namely: households (including non-profit institutions serving households), non-financial corporations, financial corporations, government and the rest of the world. In the latter, to measure the external transactions of the euro area / European Union, it is necessary to remove cross-border flows within the area concerned.