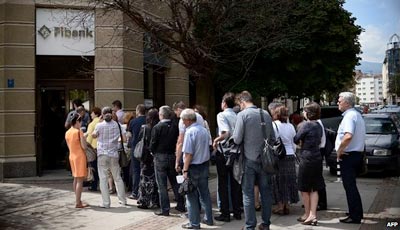 The European Commission has approved a request from Bulgaria to provide funding for some of the country’s biggest banks.

The Commission extended a credit line of 3.3bn levs ($2.3bn; £1.4bn) to help banks that Bulgarian authorities believe have been victims of a plot to undermine the banking system.

Five people were arrested over the weekend in connection with the plot.

In the past week, there have been runs on two of Bulgaria’s big banks.

“The Commission concluded that the state aid implied by the provision of the credit line is proportionate and commensurate with the need to ensure sufficient liquidity in the banking system in particular circumstances,” the Commission said in a statement.

It stressed, however, that Bulgaria’s banking system was fundamentally sound.

“[It is] well capitalised and has high levels of liquidity compared to its peers in other member states,” the Commission said.

“For precautionary reasons, Bulgaria has taken this measure to further increase the liquidity and safeguard its financial system.”

This prompted the central bank to urge all state institutions to work together to protect financial stability and take legal action against those spreading “untrue and ill-intentioned rumours” about the health of Bulgaria’s banks.