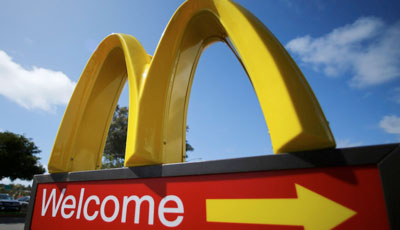 As McDonald’s Corporation (NYSE:MCD) continued to see its sales suffer in main markets such as the U.S., Germany, Japan and Australia, market analysts downgraded the fast-food giant’s stock on Wednesday, after the Illinois-based company posted a disappointing second-quarter profit, according to MarketWatch.

With this year’s turnover looking bleak, McDonald’s CEO Don Thompson evoked a sense of urgency in a conference call with investors on Tuesday, when he reportedly said that a substantial improvement in sales and customer visits won’t come any time soon. Fortunes in the restaurant business look bleak nationwide. According to MarketWatch, which cited data from the NPD Group, customers in the U.S. made about 61 billion visits to restaurants in the year until May 2014, down by about 1.3 billion visits from pre-recession traffic levels.

“There are some fundamental shifts in how consumers, particularly low- and middle-income consumers, address their discretionary spending,” Bonnie Riggs, an industry analyst at NPD, said.

McDonald’s, which is the world’s leading fast-food company, has seen a consistent slide in global market share, which has fallen to 13.7 percent in 2013 from a peak of 14.6 percent in 2009, the report noted, citing data from Euromonitor.

McDonald’s sales in the U.S. slipped 1.5 percent as people with smaller incomes reduced eating out or instead choose cheaper menus even as well-heeled customers picked other options like Chipotle Mexican Grill, Inc (NYSE:CMG), which saw its second-quarter sales grow by 17 percent, the report said.

“Similar to the stalled growth other retail sectors are experiencing, restaurants are being negatively impacted by a large segment of the population who are watching their discretionary spending closely. Going to a restaurant is a nice-to-have and not a need-to-have,” Riggs reportedly said.

Fewer market analysts now rank McDonald’s shares a “Buy” with only 29 percent recommending investment in the stock — the lowest level in five years — according to FactSet data, cited by MarketWatch.

The company’s stock fell 0.96 percent on Wednesday. In the year to date, the stock has fallen by about 1.71 percent.

According to Lynne Collier, an analyst at Sterne Agee, who dropped her view to “Neutral” from “Buy” said that the fast-food company’s “pipeline of new products has been lackluster,” and added that there are no “identifiable catalysts to reverse that trend.”

David Tarantino of Robert W. Baird who dropped his rating from “Outperform” to “Neutral” said the “persistently sluggish” trends were disappointing, and noted that it would be a challenge for the company to regain growth momentum as competition intensified, according to the MarketWatch report.