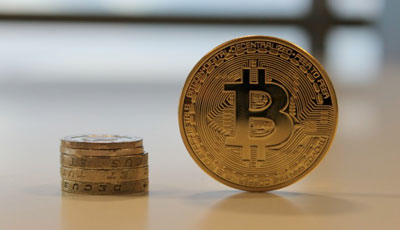 Bitcoins and other virtual currencies have grown into a global phenomenon. Some see the beginning of a new era, others see the potential for a major crash.

In just five years, the new bitcoin currency has grown from a small niche project by some computer geeks into a global phenomenon – despite some dubious transactions. And devotees of the bitcoin system are already predicting the next upheaval in payment transactions. But first things first: What are bitcoins anyway? And why are they so groundbreaking?

Virtual or digital currencies such as bitcoins have been a part of daily life for a long time: reward points from the supermarket, credit card points or air miles. In contrast to national currencies, however, they are available only within the program of the company in question. This is a major disadvantage of each of these virtual currencies. If a company cancels or alters its rewards program, the majority of a person’s balance could suddenly become worthless. Bitcoins, on the other hand, are decentralized.
There is no central issuing authority; the system is distributed across all participating computers. Whether this is a decisive advantage is the key issue for the future success of bitcoins.

How Does Bitcoin Work?
In order to gauge the chances of success of the system, you first need to understand how bitcoins work. Bitcoin is the largest and best known of hundreds of digital currencies, such as Ripple, Litecoins, Dogecoins, etc. They all have a fundamental problem: the lack of physical form. They consist only of data. And data can be copied without a great deal of effort. There is therefore a risk of the same “digital coin” being spent more than once.

When a bank transfer is made in online banking using traditional currencies, the bank guarantees that it deletes the money from the issuing account and credits it to the recipient. Bitcoins do not require a central authority. The system is based on peer-to-peer software, such as that used in music sharing. Each user has a personal, but anonymous address (similar to email) and the bitcoins as cryptographic codes (like passwords), which is why bitcoins are known as cryptocurrency.

The software provides security in that, in each case, it only observes the longest chain of transactions and all others are ignored. The underlying assumption is that a majority of users are behind the longest chain. This means that transactions cannot be revoked once they have been performed and there is no risk of double payment. For the end user, the system is very similar to that of an online credit card payment. It has the advantage of being easy and cost-effective, and there are no credit card charges. But in order to acquire bitcoins, you have to exchange them for traditional currencies in a virtual currency exchange. Once the bitcoins are stored, you can use them for payments.

Limited Money Supply
If there is no central bank, how can the money supply be increased? The surprising answer is: by using a kind of quiz. So-called miners use their computers to solve a complex mathematical problem. The miner who finds the key first is rewarded with 25 bitcoins, and the block chain is extended. Currently, 25 new bitcoins are being created every ten minutes. This reward is halved every four years; starting in 2018, only 12.5 bitcoins will be paid per block. This means that the money supply is limited and is expected to be completed in the year 2140 at a level of 21 million bitcoins.

With this mechanism, together with the system infrastructure, money creation is also regulated in a decentralized manner. There is no central bank that issues the currency. This rigid mechanism and the fact that no central bank can weaken the currency by expanding the money supply explain the enthusiasm of ultra-libertarians for bitcoins. They consider the virtual currency to be a protection against currency devaluation.

A Currency with Teething Troubles
But what are bitcoins really? A currency? A security? Or digital gold? All three definitions are accurate to a degree. Because bitcoins have properties that differ fundamentally from national currencies, an exact definition is difficult. With their limited supply and the possibility of storing value, bitcoins are similar to gold, although they have no physical existence. Many users hold bitcoins as an object of speculation. Temporarily high expectations (repeatedly unfulfilled) of a breakthrough as a currency have subjected bitcoins to wild price fluctuations (from 100 dollars to over 1000 dollars in 2013, to a current value of between 300 dollars and 400 dollars). These factors point more toward bitcoins being a security, albeit a risky one. Tax authorities in several countries have taken this view, which is why capital gains taxes are being imposed on bitcoin price gains, while transfers are exempt from VAT.

The low transaction costs and easy transfer around the globe point to a currency, as does the fact that you can already pay many online providers with bitcoins. A currency with teething troubles – which include the fluctuations – perhaps, but a currency nonetheless.

Confidence Is Everything
Do bitcoins have the potential to become commonplace and to dislodge the money monopoly from the central banks? The outlook is not good. Even if distribution as a means of payment continues to increase, the system’s advantage – decentralization – is also its biggest drawback. Unlike legal tender, there is no authority that guarantees the value of the currency, and bitcoin does not benefit from the resulting confidence. In the end, this confidence is crucial for any currency whose usage extends beyond the exchange of goods.

A currency is only worth what you believe you will be able to purchase with it tomorrow. If this confidence is removed, the value of the currency can decline rapidly, which is what happened with bitcoins at the beginning of 2014. The opposite is also harmful: The increase in value bitcoins experienced in 2013 would have corresponded to an economically crippling deflation if they had been the general means of payment. These fluctuations in value are what is stopping bitcoins from becoming more widespread as a means of payment.

Nevertheless, bitcoins have a future in certain areas and countries. When combined with the traditional financial system, bitcoins could have cost advantages over credit cards or providers such as Western Union when used as a transaction system. In countries such as Argentina and Zimbabwe, where confidence in the country’s own currency retaining its value is very low, bitcoins are an alternative that is being used with increasing success.

In the end, the question remains: Who do you trust more, your own central bank or an anonymous online network?

What is bitcoin?
Bitcoin was formed as a user network for online payments without a central authority. Since the beginning of 2008, bitcoin has developed into a technology, a currency, a security and an online community. Bitcoin transfers are irreversible, accounts cannot be frozen and transaction costs are low.

Where do bitcoins come from?
A process known as “mining” involves “miners” making their computers available to verify transactions. These users are paid in bitcoins proportionately based on the computing power that they provide.

Who Controls Bitcoin?
There is no central authority and the developers work for free on the open source software. A chief developer provides new software, but the “miners” can decide themselves whether to install updates – creating a system of “checks and balances.”