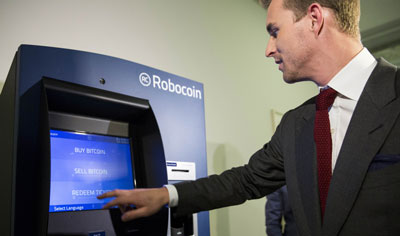 When Robocoin invented the world’s first Bitcoin ATM In October 2013, the company believed that blockchain technology would transform the remittance market. To that end, today the company is introducing Romit: the cheapest and fastest money-transfer in the world. The new application can run on a smartphone, tablet, or PC, so that any web-enabled kiosk, ATM or cashier can offer KYC-compliant money transfer services.

How Romit Works for Customers

Why Romit is Awesome

Any business with web-enabled kiosks or cashiers can now offer their customers the best experience in remittance simply by creating a Romit Cashier Account. Romit also offers a full backend for Cashier’s to view transactions, users and reports, as well as hosted KYC. Romit goes live on Wednesday Apr. 22nd at kiosks in the U.S., Hong Kong, Romania, and Italy – 20 locations in all, in four countries that each represent well over $1B remittance markets. Romit is also engaging major convenience store networks, pawnshops, and even a state-owned bank, while targeting the Philippines, India, Mexico, and other remittance-heavy markets.