Advertise With Us
Sign up for our Newsletter
Join Our Directory
Open an Account
Articles Market Analysis Michael T. Snyder

Global Crisis: Goldman Sachs Says That Brazil Has Plunged Into ‘An Outright Depression’ 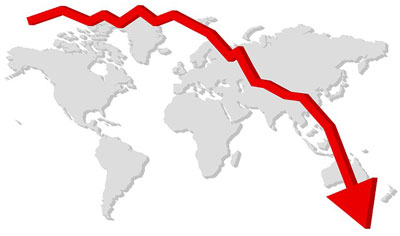 One of the most important banks in the western world says that the 7th largest economy on the entire planet has entered a full-blown economic depression.  Brazil’s economy has now contracted for three quarters in a row, and many analysts believe that things are going to get far worse before they have a chance to get any better.  Earlier this year, I warned about “the South American financial crisis of 2015“, and now it is in full swing.  The surging U.S. dollar is absolutely crushing emerging markets such as Brazil, and if the Fed raises interest rates this month that is going to make the pain even worse.

The global financial system is more interconnected than ever before, and the decisions made by the Federal Reserve truly do have global consequences.  So much of the “hot money” that was created by the Fed poured into emerging markets such as Brazil during the good times, but now the process is starting to reverse itself.  At this point, it is hard to see how much of South America is going to avoid a complete and total economic disaster.

It is one thing for Michael Snyder from the Economic Collapse Blog to say that the Brazilian economy has entered a “depression”, but it is another thing entirely when Goldman Sachs comes out and publicly says it.  The following comes from a Bloomberg article that was just posted entitled “Goldman Warns of Brazil Depression After GDP Plunges Again“…

Gross domestic product in Brazil contracted 1.7 percent in the three months ended in September, after a revised 2.1 percentdrop the previous quarter, the national statistics institute said in Rio de Janeiro. That’s worse than all but three estimates from 44 economists surveyed by Bloomberg, whose median forecast was for a 1.2 percent decline. It also marks the first three-quarter contraction since the institute’s series began in 1996, and a seasonally adjusted annual drop of 6.7 percent.

And when you look deeper into the numbers they become even more disturbing.

Unemployment is rising, consumer spending is way down, and investment spending is absolutely collapsing.  Here is some of the data that Goldman Sachs just released that comes via Zero Hedge…

Private consumption has now declined for three consecutive quarters (at an average quarterly rate of -8.5% qoq sa, annualized), and investment spending for nine consecutive quarters (at an average rate of -10.0% qoq sa, annualized). Overall, gross fixed investment declined by a cumulative 21% from 2Q2013. The declining capital stock of the economy (declining capital-labor ratio) hurts productivity growth and limits even further potential GDP. The sharp contraction of real activity during 3Q was broad-based: both on the supply and final demand side. Final domestic demand weakened sharply during 3Q2015 (-1.7% qoq sa and -6.0% yoy) with private consumption down 1.5% qoq sa (-4.5% yoy) and gross fixed investment down 4.0% qoq sa (-15.0% yoy). Finally, on the supply side, we highlight that the large labor intensive services sector retrenched again at the margin (-1.0% qoq sa; -2.9% yoy).

The term “economic depression” is not something that should be used lightly, because it conjures up images of the Great Depression of the 1930s.  And the Brazilian economy is very important to the global economic system.  As I mentioned above, there are only six countries in the entire world that have a larger economy, and Brazil accounts for more than 242 billion dollars worth of exports every year.

So if Brazil is feeling pain, it is going to affect all of us.

Up to this point, everyone had been calling what has been going on in Brazil a “recession”, but now Goldman Sachs is the first major bank to label it “an outright economic depression”…

“What started as a recession driven by the adjustment needs of an economy that accumulated large macro imbalances is now mutating into an outright economic depression given the deep contraction of domestic demand,” Alberto Ramos, chief Latin America economist at Goldman Sachs Group Inc., wrote in a report Tuesday.

Of course Brazil is far from alone.  The third largest economy on the globe, Japan, has also now slipped into recession territory.  So has Russia.  And just today we learned that Canadian GDP is plunging…

Who could have seen that coming? It appears, for America’s northern brethren, low oil prices are unequivocally terrible. Against expectations of a flat 0.0% unchanged September,Canadian GDP plunged 0.5% – its largest MoM drop since March 2009 and the biggest miss since Dec 2008.

It is just a matter of time before this global economic downturn catches up with us here in the U.S. too.

In fact, there is evidence that this is already happening.

According to brand new numbers that just came out, manufacturing activity in the U.S. is contracting at the fastest pace that we have seen since the last recession…

Manufacturing in the U.S. unexpectedly contracted in November at the fastest pace since the last recession as elevated inventories led to cutbacks in orders and production.

The Institute for Supply Management’s index dropped to 48.6, the lowest level since June 2009, from 50.1 in October, a report from the Tempe, Arizona-based group showed Tuesday. The November figure was weaker than the most pessimistic forecast in a Bloomberg survey. Readings less than 50 indicate contraction.

Another indicator that I am watching is the velocity of money. 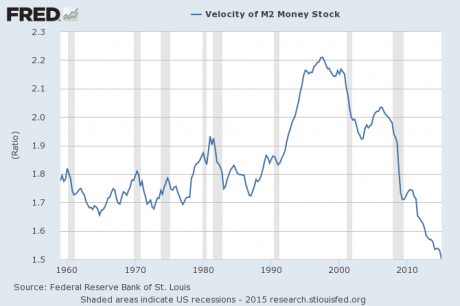 When a recession ends, the velocity of money normally starts going back up.

But a funny thing happened when the last recession ended.  The velocity of money ticked up slightly, but then it started going down steadily.  In fact, it has kept on declining ever since and it has now hit a brand new all-time record low.

This is not normal.  Yes, Wall Street is temporarily flying high for the moment, but the underlying economic fundamentals are all screaming that something is horribly wrong.

A global crisis has begun, and the U.S. will not be immune from it.  I truly believe that we are heading toward the worst economic downturn that any of us have ever experienced.

But there are many out there that insist that nothing is the matter and that happy times are ahead.

So who is right and who is wrong?

We will just have to wait and see…