Bitcoin is one of 2015’s biggest winners 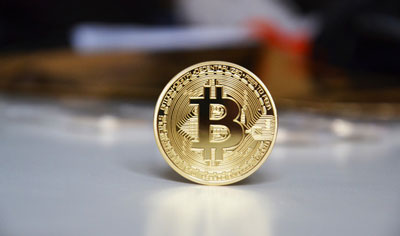 Gold is down nearly 10 percent, major U.S. stock indexes are roughly flat and energy commodities have nearly all fallen more than 30 percent: It’s been a tough year for investors. And while individual stocks have seen big pops on headlines, perhaps the best performing non-equity asset of the year is a favorite among crypto-anarchists.

Those huge gains come after starting the year on rocky footing: Bitcoin dipped to below $175 in mid-January. But after a few false starts, the digital currency has been largely gaining ground since the beginning of October.

(One of the few investment options with a comparable 2015 return is Argentina’s benchmark Merval — up about 40 percent on the year. Although U.S. investors playing the Global X Argentina ETF would be disappointed by the fund’s slight loss in 2015.) 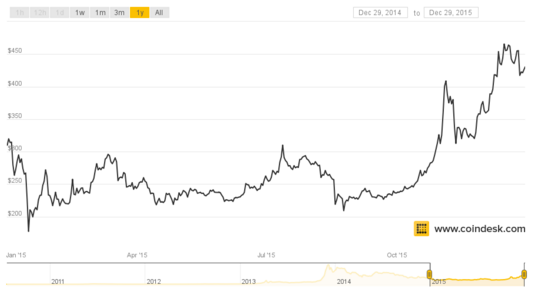 In November, digital ecosystem observers told CNBC that a 70 percent one-month spike may have been caused in part by headlines like the Winklevoss twins launching their exchange and the Digital Currency Group announcing funding from Bain and MasterCard. Others suggested that the relatively lightly traded asset could have been jumping on speculators’ fear of missing out (FOMO).

For Brendan O’Connor, the CEO of bitcoin trading firm Genesis Global Trading, the year-end run up was the result of a series of positive trends for the asset.

On the one hand, O’Connor said, funding announcements from bitcoin-related start-ups helped to establish the legitimacy of the sector — and its underlying technology. This has helped push institutional investors into making investments in both the digital token and the over-the-counter Bitcoin Investment Trust.

“They’re looking for investments in non-correlated asset classes,” O’Connor said, explaining that financial firms regularly come to his office to learn how to trade bitcoin. “I still think that by and large they’re viewing it as a speculative investment, but I think that their willingness to test the waters has increased dramatically.”

Another important trend in the space has been the gradually increasing interest the technology — and it’s negligible fee structure — for remittance payments and as a daily currency in monetarily challenged parts of the world, O’Connor said.

That potential came to the forefront of the tech discussion during the summer’s Greek crisis: When the country instituted capital controls in the face of increasingly dire eurozone negotiations, countless articles were written about bitcoin’s potential for struggling citizens.

It’s unclear if those prophecies ever came to any real fruition, but investors in the space say the positive press coverage at least boosted awareness of bitcoin’s potential.

Finally, bitcoin may have simply benefited from the lack of any disastrous headlines. Many traders say the cryptocurrency has shed the pall of failed exchange Mt. Gox — which quickly shuttered in 2014 after saying it lost 850,000 bitcoins (worth about $365 million today).

Bitcoin’s fall from more than $1,150 near the end of 2013 to this January’s $200 levels represented the asset’s “long winter,” according to economist Tuur Demeester, editor-in-chief of bitcoin-focused Adamant Research. The story of 2015, therefore, has been a bottoming out for the digital asset, and a climb to revaluation.

Bitcoin’s fall from its highs, Demeester said, was the result of “bubblicious” investing in 2013 (with some help from Mt. Gox). Pricing levels remained depressed for so long because companies had become over-leveraged, and so had been squeezed into heavy bitcoin selling, he said.

As for 2016, Demeester suggested that the cryptocurrency could likely see another leg up as newly confident investors seek the right market valuation.

“But,” he said, “with bitcoin you have to expect to be surprised.”

Source: CNBC – Bitcoin is one of 2015’s biggest winners