Can the IMF afford to stand back on Greece bailout money? 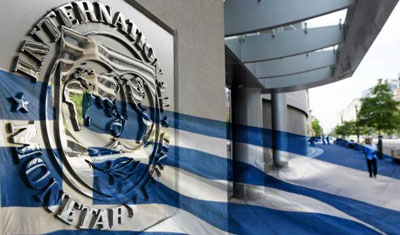 IMF turns its back on Europeans in Greece bailout

The IMF said it won’t give another penny until it sees a concrete plan from the Europeans to substantially cut the country’s debt burden.

In the end, however, the anti-global crisis lender again refused to support Greece’s third rescue program with its own financial contribution.

The IMF said it won’t give another penny until it sees a concrete plan from the Europeans to substantially cut the country’s debt burden. Wednesday’s agreement by the Eurogroup finance ministers failed to deliver that.

The IMF is now focused on protecting its own reputation after the failure of the first two joint Greek rescue operations — even if it sours relations.

But with the Greek economy still teetering with Athens owing the fund billions, can the IMF afford to stand back?

“Of course,” says Thanos Catsambas, who represented Greece at the IMF until July 2015.

Just by remaining involved in bailout negotiations, the IMF is doing a favour for Germany and other European heavyweights that want the fund to ensure Athens implements promised reforms, Catsambas said.

The landscape has changed since 2010 and 2012, when the IMF provided Greece with the largest loans it had ever given any country in trouble.

It agreed under heavy pressure from Europe, fearful that a Greek meltdown would fracture the eurozone itself. Even at the time, however, the IMF had doubts those plans would work.

The fund committed $65 billion to Greece in total, disbursing around $34 billion before the bailout programs ran into trouble.

“In 2010, Greece was so central in holding Europe together, and the IMF had to compromise on its principles and to go along with something they probably knew couldn’t work, but was aimed at avoiding a financial crisis,” said Desmond Lachman, a former IMF official.

Now that the Europeans have their own financial stability mechanisms, Greece’s problems no longer threaten the broader eurozone economy.

The IMF is more prudent, too, after Greece missed debt payments of around $2 billion last year, the largest ever default the fund has incurred, threatening its credibility.

Although Greece finally made those payments, the risk of default remains: Athens still owes the IMF $16.2 billion.

Now the fund is insisting that any bailout program ensures Greece’s finances are “sustainable” — that it will be able to both grow its economy and repay loans over the long term.

With Athens owing creditors hundreds of billions of dollars, the IMF says the Europeans must come up with a plan to lighten the burden to achieve sustainability.

That would require cutting interest rates, extending repayment periods and setting a long grace period before Greece must start repaying, the fund spelled out in a recent analysis.

“The Fund is saying let’s end the charade and let’s get serious,” Lachman said.

But even as they unblocked more than $11 billion in new funds for Greece on Wednesday, the Europeans offered only a vague debt relief plan. That was insufficient.

“We need to be assured that the universe of measures that Europe is willing to commit to is consistent with what we think is needed to produce debt relief,” a senior IMF official said after the deal.

“We do not yet have that at this point.”

The IMF management is under pressure from emerging market members not to bend any more of its own rules to help Greece.

But the fund held out the possibility it would add its funds to the Greek bailout if the European side offers a detailed relief plan by year’s end.

That may be wishful thinking.

German Finance Minister Wolfgang Schaeuble derided the IMF’s suggestion to free Greece from servicing its debt until 2040, saying creditors might as well “do a grace period of a thousand years.”

Catsambas believes the IMF may be asking too much of European politicians who must answer to public opinion in their own countries, saying postponing repayment years into the future is the equivalent of a debt write-off.

“I don’t know if the Europeans can accept this.”

Source: Daily Nation – Can the IMF afford to stand back on Greece bailout money?