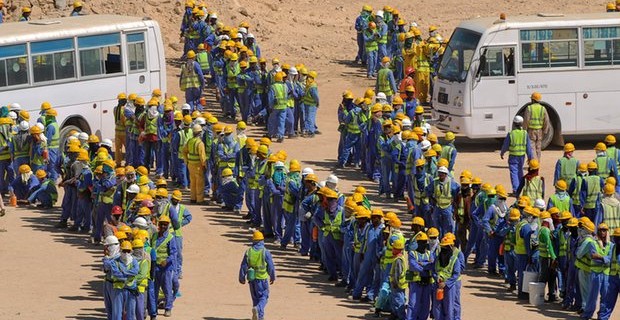 Fifa is facing legal action in the Swiss courts over its alleged complicity in the mistreatment of migrant workers in Qatar ahead of the 2022 World Cup, the Guardian can reveal.

Since Fifa voted in December 2010 to hold the World Cup in the tiny Gulf state,Qatar has faced intense criticism over the plight of an army of migrant workers that soared to 1.7 million as the country embarked on a construction spree to build the stadiums and infrastructure required.

But the legal challenge, brought by the Netherlands Trade Union Confederation (FNV) on behalf of a Bangladeshi migrant worker called Nadim Sharaful Alam, is the first time that Fifa has been made directly accountable in the Swiss courts.

In a letter sent to world football’s governing body, which almost collapsed in the wake of a 2015 corruption scandal, on Sunday night lawyers acting for FNV and Alam have given Fifa’s new president, Gianni Infantino, three weeks to accept its complicity and pay damages before going to court.

While the damages sought by Alam are relatively modest, if the action is successful it could open the door for hundreds of thousands of migrant workers to make similar claims that could run into tens of millions of pounds.

Fifa has consistently argued that while it does not have responsibility for wider “societal problems” in host countries, it is doing what it can to make the Qatar World Cup a catalyst for change by engaging with the Qatar government to ensure satisfactory conditions for workers on World Cup stadium sites.

But critics including major NGOs and trade unions have argued that Fifa should do more to use its influence to push for improvement for workers on related infrastructure projects and for wider changes to the kafala system that has been compared to a form of modern slavery.

In a letter to Infantino accompanying a draft writ that could be lodged in the Swiss courts, lawyers call on Fifa to “acknowledge that it has acted wrongfully by awarding the World Cup 2022 to Qatar without demanding the assurance that Qatar observes fundamental human and labour rights vis-à-vis migrant construction workers whose work is related to the 2022 World Cup”.

It says that Fifa should have demanded the abolition of the kafala system, the guarantee of the right of migrant workers to change jobs, freedom for them to leave Qatar if and when they chose to and the right to unionise.

The letter adds: “Alternatively Fifa should acknowledge that it should not have awarded the World Cup 2022 to Qatar.”

Infantino is also called upon to acknowledge that Fifa violated the rights of Alam, a Bangladeshi who worked in Qatar as an unskilled labourer between 2014 and 2016, and asks for compensation for material damages of 5,390.53 Swiss francs and “just satisfaction to the amount of CHF 5,000 for the hardships he endured”.

Under the heading “wrongful acts committed by Fifa”, the summary of the writ says that “Swiss law, but also Qatari law and international law oblige Fifa to respect fundamental human rights and refrain from wrongdoing”.

It adds: “Fifa’s legal responsibility arose at two distinctive moments in time: (1) when it allowed Qatar to participate in the bidding contest for the World Cup 2022 and subsequently selected Qatar as host of the 2022 World Cup; and (2) when it failed and still is failing to take responsibility for the present fate of the migrant workers by not demanding Qatar to reform its labour system.”

While the initial focus following the controversial decision was on possible health problems for players and fans associated with playing the tournament in temperatures of 45C and the corruption allegations that surrounded the vote, a series of damning reports from Amnesty International, Human Rights Watch and a Guardian investigation led to a global outcry.

The Qatari government commissioned law firm DLA Piper to write a report but more than two years after it was made public in May 2014 its recommendations have not yet been implemented in full and no progress has been made on cataloguing how many migrant workers are killed or injured while working in the country.

Some practical changes have been made, such as the requirement to pay salaries electronically, and new laws proposed, but campaigners believe they will do little to address the underlying structural issues and represent a rebranding rather than a repealing of the kafala system.

The 2022 organising committee has built much improved accommodation for those working directly on stadium developments, but for the vast majority of workers on related infrastructure projects conditions remain abject.

Critics also complain that too little is being done to clamp down on unscrupulous recruitment agencies in countries such as Nepal, India and Bangladesh that charge large sums for workers to find jobs in Qatar and then demand repayment.

As recently as June Qatar was accused of “appalling treatment” of migrant workers by a critical Amnesty International report.

Fifa, which earlier this year published a report from human rights expert Prof John Ruggie of Harvard University and promised to implement his recommendations, has continually claimed that it can’t be held responsible for working conditions but hopes to use the World Cup to bring about change. It has also attempted to suggest that its responsibility only extends as far as the World Cup stadiums.

But the lawsuit argues that the World Cup has “vastly accelerated Qatar’s construction development efforts”, pointing to new metro lines, the new city of Lusail that will house the stadium set to host the final and new highway and bridge projects.

“The World Cup 2022 is the motivating force behind all these vast infrastructural projects, all scheduled to be completed before the tournament, on time for the influx of tourists expected,” it says.

The writ further argues that Fifa has the required mechanisms to force host countries to comply with whatever conditions it sets down.

“In order to host the World Cup, Qatar had to take part in a bidding procedure. Fifa defines the terms for participation in the bidding procedure and is able to create legally binding obligations of the host state vis-à-vis Fifa,” it said.

“Fifa may claim that it can do nothing but that is not the case. The union would rather see the World Cup stay in Qatar and for the country to meet its responsibilities to migrant workers but Fifa could still move the World Cup if it wanted to,” said Zegveld.

“We met with senior Qatari officials and they said they needed time to introduce new laws. They may say they need time but in reality they are just buying time. In any case, the new laws do too little to change the fundamental problems facing migrant workers and will mean little unless they are enforced.”

A spokesperson for FNV, the biggest union in the Netherlands with 1.1 million members, said that while there had been some progress towards improving conditions, things were moving far too slowly.

“The FNV takes the view that by awarding the World Cup to Qatar, the suffering of migrants increases. In any case, in situations like these, the number of migrant workers will increase. The FNV holds the Fifa responsible for this and wants to address the issue by means of this lawsuit,” the spokesperson said.

“The world must do everything that is possible in order to change this situation. And if you expect the world to do this, you have to begin by taking responsibility yourself. That is why FNV is taking the matter to its source, and is holding the Fifa responsible.”

The new Fifa council, rebranded from the old disgraced executive committee and expanded to 36 members, meets in Zurich this week. Since Infantino took over from Sepp Blatter in February, he has insisted that Fifa is turning over a new leaf.

“While Fifa cannot and indeed does not have the responsibility to solve all the societal problems in a host country of a Fifa World Cup, Fifa has taken concrete action and is fully committed to do its utmost to ensure that human rights are respected on all Fifa World Cup sites and operations and services directly related to the Fifa World Cup,” said Fifa’s head of sustainability, Federico Addiechi, in June in response to the critical Amnesty International report.